Back on March 2, I attended N.W.I.P.A.'s annual Triple IPA Fest. I've lost count on how many years I've gone to this, but it's probably at least three, maybe four now. The difference this year: Pliny the Younger was on draft for the first time, along with nine local brews. 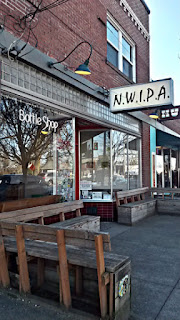 With the news that Pliny the Younger would be on draft, I would have figured that it wouldn't be put on until much later; that way, the main attraction can be saved in some way. But it was tapped right at the start, allowing the early birds to score the high-demand brew. 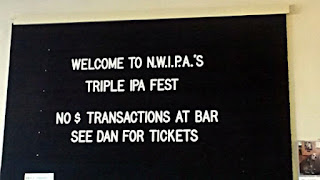 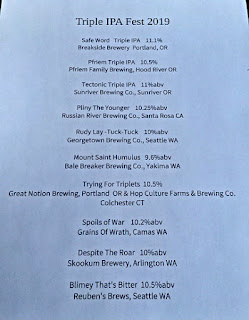 For $5, you got a gold plastic token ensuring your 6 oz pour of the Younger. Any other beers were redeemed via ticket. Tickets were $2 each. One ticket gave you a 4 oz pour, while two tickets made it a 6 oz pour. Obviously, that meant if you wanted to maximize beer consumption, make all your pours 4 oz. Just beware, the lowest ABV beer on the board was 9.6%. 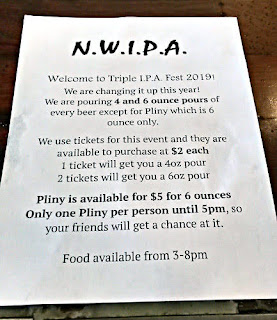 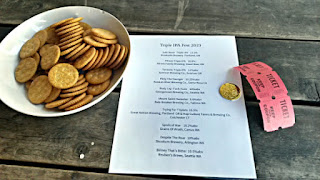 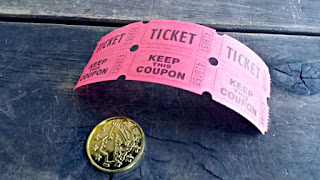 Food would be available starting around 3 PM from a local startup. Before 3, though, your only snack was Ritz crackers.

I beelined for the bar area to get my Pliny pour first. You can read about my thoughts on this year's batch on my beer blog. 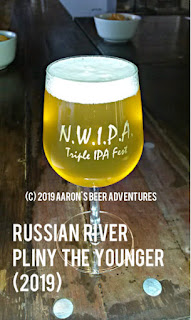 I then went to town on Triple IPA science.

Great Notion's Trying for Triplets (10.5%): About a week prior, Great Notion held a can release for this beer at their recently opened NW location. At first, I thought there was a bit too much octane on the tongue, but as the beer warmed up, the tropical came through a lot more. Very dank on the nose. Citrus aftertaste always a plus with this NE-Style beer. 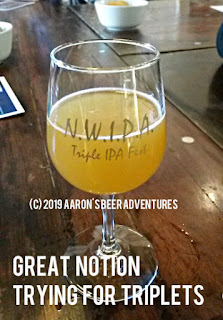 Grains of Wrath Spoils of War (10.2%): Another NE-Style brew from just over the bridge in Camas. Grains of Wrath did several collabs before opening their brewpub last year. This one had a combination of stone fruit, oaty malt, and dank, with slight octane in the middle of the drinking experience. Finished citrusy-dank. Well done. 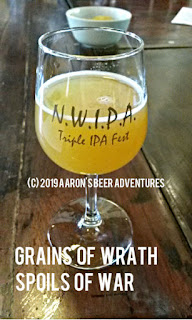 Skookum Despite the Roar (10%): Another hazy beer with balanced dank and ripe stone fruit. Balanced every trait, from hops to juicy to dank to octane. Good carbonation with a citrus-peel like aftertaste. Outstanding. 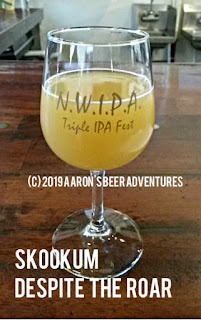 Georgetown Rudy Lay Tuck Tuck (10%): Yes, another hazy beer. Predominantly mango on the nose and flavor. Did not feel as full-bodied as the first few triple IPAs I had. Still had trace octane from the middle into the aftertaste. The aroma here was the best part. 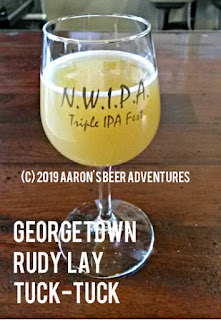 Reuben's Brews Blimey That's Bitter (10.5%): A clear golden beer with white head, this one was your traditional West Coast -style and surprisingly very easy drinking. I'd even say it was on par with Pliny the Younger in terms of drinkability. 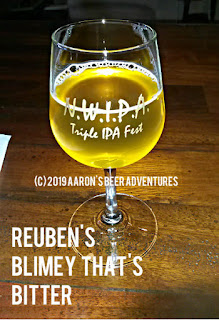 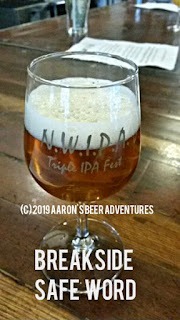 As for food, Darius (A World Cuisine Experience) had a Smashed Sandwich and African Peanut Stew as options. I enjoyed the sandwich ($12), basically a panini featuring hand-chopped steak, eggs, fried capers, and spicy mustard. The steak was juicy akin to meatloaf, and that spicy mustard had a horseradish-like kick that took it to next-level territory. 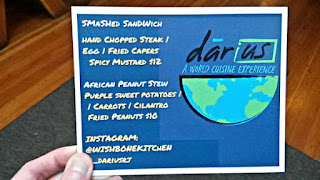 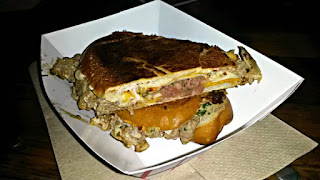 I spent a good 3-4 hours at the event, in between venturing out for a walk to break up the beer monotony. Fortunately, this year's event was held on a sunny day, so no weather issues to be found (unless you despise chilly weather).

I'm already looking forward to next year's event, and we'll see if they will have Pliny the Younger again in 2020!
Posted by Aaron at 11:00 PM