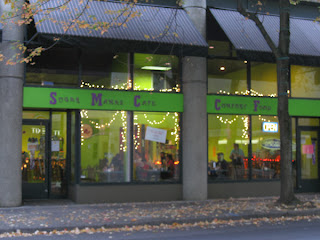 For those that aren't aware, cinnamon rolls remain one of my many weaknesses. It's just hard to resist carbs filled with gooey cinnamon-sugar and topped with sweet addicting icing.

Sugar Mamas' Cafe serves two types of cinnamon rolls (Classic and Maple Bacon) and their Caramel Pecan Sticky Buns every Friday. Since I'm unable to get to downtown Portland on Fridays, I used the power of social media and had one classic cinnamon roll ($3.75) and the Maple Bacon cinnamon roll ($4.75). Unfortunately, the sticky buns are immensely popular and I was not able to try that (yet). 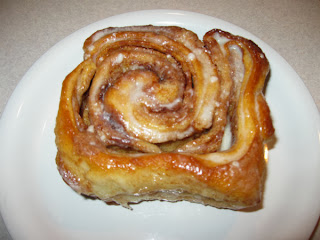 This is a heck of a cinnamon roll. I reheated it at home for about 20 seconds since I prefer them warm. The sugary glaze virtually coated the entire cinnamon roll, with the cinnamon-sugar layers providing a food porn-worthy sight. 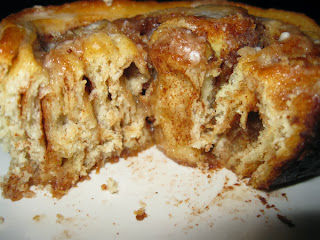 I loved that the Maple Bacon Cinnamon Roll sprinkled bacon bits on top. Spread the pork love all over the top. Embrace meat crack. 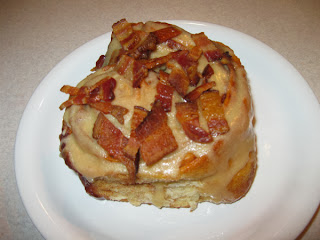 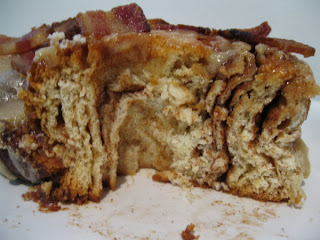 Both rolls were very good. As much as anything "maple bacon" might be in terms of winning the internet, here, I would stick with the classic cinnamon roll. Either the maple syrup and icing combined for sugar overload, or the bacon might have tried too hard to sway me. I'm guessing the former. 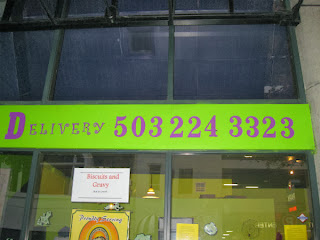 I've been reeled in with tasty cinnamon rolls, and hopefully I can fit in a time to go back for another meal. 8.25/10
Posted by Aaron at 12:00 AM