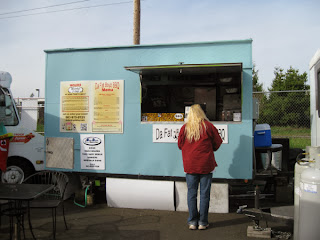 John opened his food cart back in August at another spot on 82nd Avenue, then a spot opened up at Cartlandia within the past few weeks. Being a fan of BBQ, I've been pleased to see several BBQ carts that have set up shop in this food pod in the past year or so. 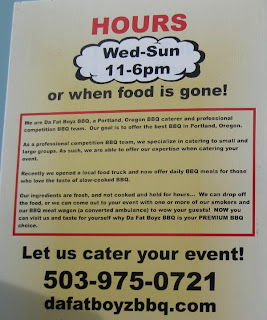 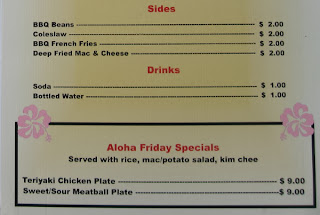 John has the usual classic meats: ribs, brisket, pulled pork, and chicken.What first caught my eye here was the BBQ Parfait ($7), a genius savory twist on a sweet classic. It's basically a meat of your choice (brisket, pork, or chicken), then BBQ beans, then another meat of your choice, and finally topped with choice of cart-made cole slaw or Hawaiian-style potato/macaroni salad.

Frankly, I'm shocked that more BBQ places (at least around here) don't do this type of dish. For me, I think I might like this better with the cole slaw, only because the crunch of the slaw would provide a better texture contrast from the rest of the parfait.
The ribs are also fantastic. The meat came clean off the bone, and the layers of glaze provided a wonderful crispiness. You can add some BBQ sauce on top, but heck, I even enjoyed a naked rib here. 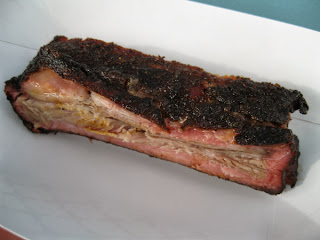 The cart name and its "Aloha Friday" menu are appropriate; John's wife is from Hawaii and they met there.

Da Fat Boyz BBQ is open Wednesday through Sunday from about 11-6 (or until all the food is sold). John has some awesome food. I'd highly recommend this cart to any fan of BBQ, and it'll probably convert several people otherwise. 8.75/10
Posted by Aaron at 12:00 AM