I returned to Crepes Plus earlier this month after getting a private message from Alex about updates to the menu. True to the cart's name, Crepes Plus is now more than just crepes. 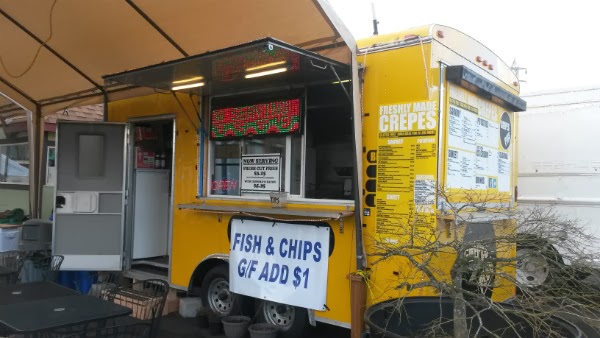 In the last few weeks, Randy has expanded his menu to feature non-crepe items, both savory and sweet. There's soft-serve ice cream on the sweet side, and a few savory dishes that make me a giddy panda.

The fish and chips here are probably unlike any fish and chips you'll be used to seeing. Randy opts for a soft batter instead of the crispy frying job. He basically got his inspiration from the fish and chips he grew up eating. Randy uses cod as his fish of choice. You'll get four pieces and some fries for $12. There's some top-notch tartar sauce here, too.

While I initially wanted a full order of the fish and chips, my eyes basically saw poutine and it was all over. Take my $7.25 and call it a day. At the time of my visit, the cheddar cheese curds (yellow curds instead of the traditional white curds) came from New Seasons. 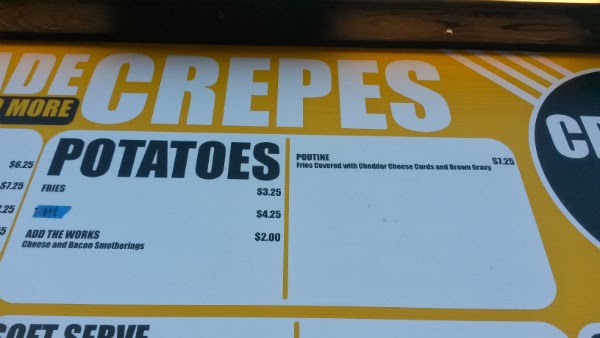 The brown gravy was quite typical. I've basically gotten extra spoiled after sampling some amazing poutine from our Canadian friends up north (see La Belle Patate and Smoke's Poutinerie as some prime examples). Still, it would be completely unfair to compare the Canadian poutines to the ones in Portland -- you just can't.

For what it's worth, Crepes Plus has a respectable version. Fresh-cut fries are a big plus here; amazing golden brown color. While I'd love a ton of squeaky cheese curds and that addicting herbaceous gravy from Canada, this certainly satisfied my poutine fix for now.

Crepes clearly remain the big seller here, and the portions are quite nice. Yes, I even saw seasonal specials like a Deep-Fried PB&J crepe. You can create your own if you wish, as long as all the ingredients can be found in the food cart.