I've been a longtime customer of PBJ's Grilled. Since my last post about them, Keena and Shane have been doing well at their second cart (at Cartopia). I had to highlight a couple of their new menu items. 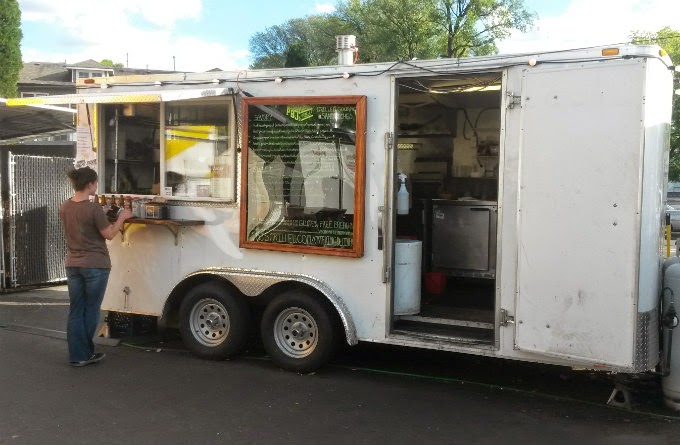 The news broke in mid-September 2014 that Cartopia would be staying open for at least another two years. Frankly, I hope that pod stays. It's really one of the only pods to have a solid weekend nightlife atmosphere, staying open until 3 AM.

In early September, Keena and Shane rolled out variations on some new menu items. Carnitas would be added to their "Betty" sandwich, and crispy fried chicken would now be an option to the "Spicy Thai" and "Good Morning" sandwiches. Keena's crispy chicken here was inspired by her mother, who had an amazing secret fried chicken recipe that was never shared with anyone.

But first, a sandwich I had yet to try: the "Sun Up": PBJ's peanut butter, granola, bananas, and honey on cinnamon raisin bread. This is an awesome sandwich, but fair warning, it's also extremely sweet. One great recommendation is to add an egg and some bacon ($1.50 for the egg, $2 for the bacon) for a sweet-savory balance.

While the "Spicy Thai" at the Cartopia cart usually comes with crispy coconut shrimp, you can get Keena's fried chicken instead. Spicy Thai with chicken it is!

Longtime followers of my blog may remember that the "Spicy Thai" (sans shrimp or chicken) was the first sandwich that I ordered from this food cart (at the their original NW 23rd spot). PBJ's peanut butter, sriracha, basil, orange marmalade, and curry powder in this one. 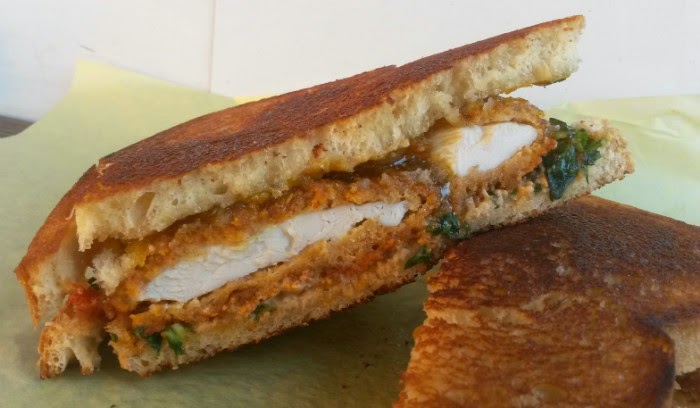 First of all, the chicken here is ridiculously good. Nicely seasoned, with a bit of heat (likely paprika and cayenne pepper). Most importantly, all the components can be detected. The basil and curry came at me first, along with the crispiness of that chicken. The marmalade and sriracha chime in milliseconds later.

Just FYI, I arrived on a day when the cart had already got slammed with a million orders and had to restock. I gladly waited an hour and a half for the Spicy Thai with chicken. I regret nothing.

Basically, this is one sandwich you must try.

I kid you not, the first time I tried it, the "Betty" tasted like an incredible cheeseburger with mustard. I too did a double-take and triple-take at the menu and the sandwich to make sure. The panda was fooled, and in a neat way.

When I came back for a full sandwich, I got more of a kalua pig experience, and the peanut butter was more noticeable. Still awesome.

I'm more of a savory sandwich guy than a sweet sandwich dude, but I'd eat any of these on a given day and perhaps two on Sunday.

Aside from: (1) subbing the crispy chicken on the Spicy Thai and/or (2) accounting for any allergies, PBJ's generally refrains from doing substitutions.

I've been coming here for over three years. PBJ's is a food cart to try. It's only a matter of time before we see this place go brick-and-mortar. 9.75/10
Posted by Aaron at 11:00 PM