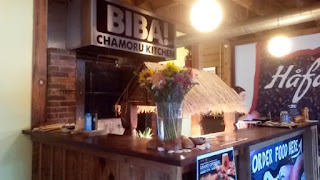 When PDX 671 closed its food cart last May, I was bummed, to say the least. Then I got official word that they basically were reopening in Oakshire's Portland beer hall. Biba opened in mid-July and held its grand opening on August 17.

If you've been to the PDX 671 cart, it's pretty much the same menu, with perhaps a couple of items added.

I wasted no time getting the Kelaguen Mannok with flatbread ($12) again. After all, it had been way too long since I had that dish. Kelaguen is a signature cold chicken dish from Guam, with onions, coconut, lemon juice, and Thai chiles added. Chopped cubed dark meat for maximum flavor. 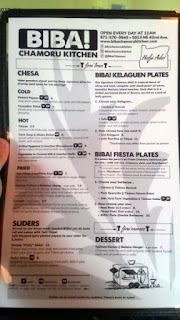 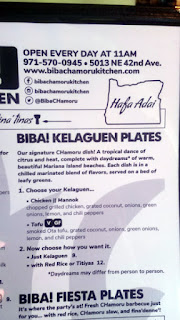 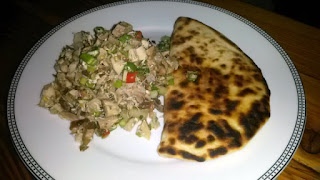 Their flatbread, also known as titiyas, is made with coconut milk, and you can smell that coconut milk as you put the flatbread bear your nose. Put some of that chicken in there and make it a taco. Or you can get the kelaguen with red rice (hineksa agaga).

Not surprisingly, it's more expensive than it was at the cart (yay inflation and higher overhead costs). Not sure what cart prices were in its final weeks, but something like this was around $8 back in 2012. It seems like a small portion for $12, but for something more filling, I'd recommend their fiesta plates and perhaps an appetizer (or two). 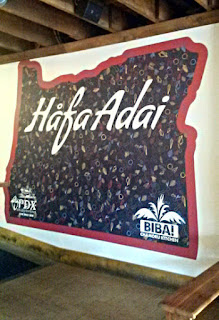 With many breweries choosing to have standard American brewpub items or food carts, Guamanian food is a nice break from the norm. Check out Biba CHamoru Kitchen! 8.25/10
Posted by Aaron at 11:00 PM