Kindle's Donuts is located on S Normandie Avenue in Los Angeles, California. They are probably one of the places known for the huge doughnut on top of the building. It should be noted that at least one other spot in the city has the same type of building design (i.e., Randy's Donuts). 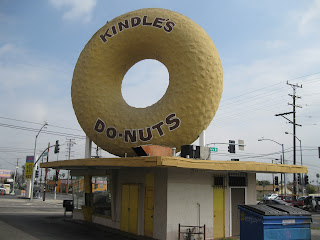 Panda logic = find and eat the largest doughnut in the city that you can get your paws on. One of my friends who lives in Southern California mentioned Kindle's "Texas Donut" ($1.30). 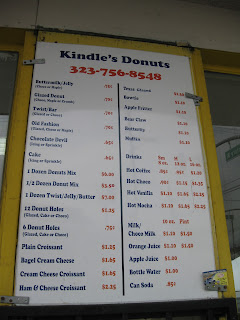 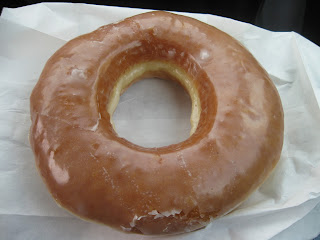 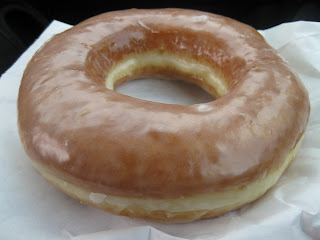 Awesome quality on Kindle's doughnuts. Light and fluffy, with a nice glazed shell. Probably should eat at least a half-dozen of the Texas doughnuts next time. Seriously a doughnut that deserves the "5/5 pandas" rating.

I think it's good that you can order here like you're going to the drive-thru. Figure that shouldn't be a problem if you're concerned with getting out of your car in this area. Panda logic also meant I didn't follow such advice and walked up to the window with cash in hand anyway. For those that don't know, this place is cash only.

Here's some video of me eating the large doughnut while hanging out with Molly Schuyler for the day!

I still think the Tex-Ass Doughnut at Voodoo Doughnut (Portland, Oregon) is larger. But Voodoo's is also about three times more expensive, so as far as the large doughnut battle is concerned, Kindle's wins the internet.

As stated above, it's probably not the safest area of Los Angeles to venture to, so I'm likely not gonna make this a regular stop every time I visit. However, for the price and the quality of the doughnut I received, I'm a solid fan of Kindle's Donuts. Check them out! 8.5/10
Posted by Aaron at 11:00 PM