The Cheese Plate is located at the corner of NE 23rd and Alberta in Portland, Oregon. After several months of wanting to visit this cart, I finally got my chance at the end of March. 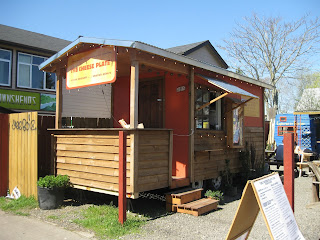 Nick and Carina had seen my comments on their Facebook fan page enough times, and when they mentioned they tried putting Alma Chocolate's caramel sauce in a grilled cheese, I said enough was enough. Gotta get my lazy rear out there.

The Cheese Plate also carries vegan and gluten-free options, so virtually anyone can dine here. 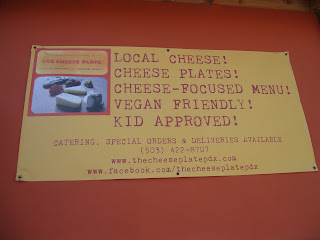 When I did get to the cart, I really craved some type of grilled cheese. The sandwich a la carte is $6. It's $8 total when you add Pacific Northwest kale chips, Masala Pop popcorn, or some cart-made pickles to your order. You'll pay $9 when adding a cup of soup with your grilled cheese.

There are four options on the grilled cheese (two of them vegan), and I ordered the one with local aged cheddar, blue cheese, caramelized onion and fig jam on levain bread. Yes, fig jam. 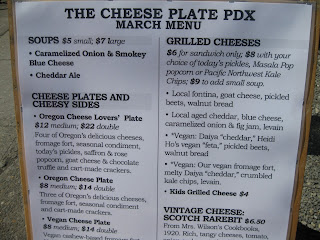 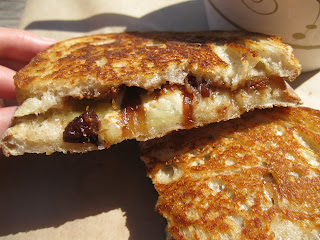 Wonderfully prepared grilled cheese, pleasing crunch, lovely golden brown. I really enjoyed the savory and sweet harmony the cheese and the fig jam shared. I thought it was the right amount of blue cheese so it wouldn't overpower the other flavors.

I got a cup of cheddar ale soup with my grilled cheese (otherwise, it's $5 for a small and $7 for a large). The cheddar provides a slightly creamy texture and a nice bite. I'm still able to detect the ale used in here. So delicious. The cart-made croutons on top started crunchy and softened in the warm soup.

I'm sure tomato soup has been an option at this cart in the past, especially during the winter months. That's probably my one suggestion for the soups: keep the tomato soup option all the time. I'm a complete sucker for that stuff, so more money probably ends up coming out of my crying wallet.

I sampled some of the Masala Pop savory popcorn, which is seasoned with some light Indian spices sprinkled on top. More palate-pleasing snacks!

Finally, I shifted to their "healthier" portion of the menu. I tried some of The Cheese Plate's awesome cart-made seed crackers and some of the tasty avocado dressing that goes on a salad that they once ran as a special. The seed crackers contain several types of seeds, and all crackers are made in their dehydrator. 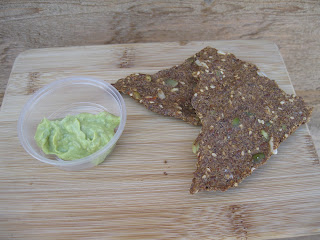 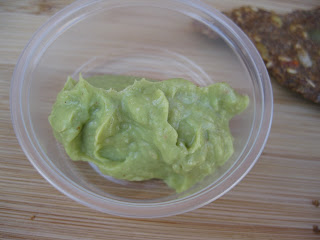 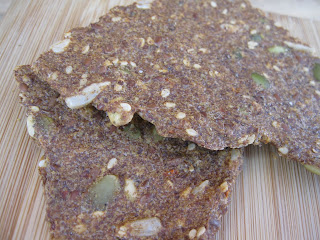 If you noticed up above, the menu will change from time to time. For example, there was Scotch Rarebit ($6.50) on the March menu, which was made from a 1920 recipe. Think open-faced cheese sandwich with tomato, Worcestershire, and paprika in it. It's not on the current (April) menu, but I wouldn't be surprised if it showed up again.

The Cheese Plate recently competed in the Kelly's Jelly Challenge, which concluded early last week. I'll have a separate blog post at a future date that will cover the challenge more in depth. For purposes of this blog post, I will say that The Cheese Plate put up one heck of a dish and frankly, it helped in getting this cart over as one of my elite spots to hit up.

Another highly recommended cart, especially if you're a cheese addict! Head on over to The Cheese Plate ASAP! 9/10
Posted by Aaron at 11:00 PM