Several videos have gone up since my last YouTube post. More videos from Los Angeles have made their way onto the channel, and I got to be part of a massive YouTube collab featuring McDonald's hamburgers. 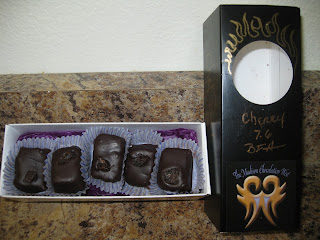 As you could tell from my April 6 blog post, I had a ton of fun in Southern California. While my friends gorged on some massive pizzas at Big Mama's and Papa's, I took down a pizza with a slight kick: the Dr. Death Suicide Pie at Luigi Ortega's. More jalapenos than slivers of habanero. Didn't take me long to finish a 12" pie.


The day I left, Molly Schuyler and I stopped by Kindle's Donuts so that I could get my sugary fix. I wouldn't mind trying to eat a dozen of those "Texas donuts." After all, it's just $1.30 each for a decent-sized pastry.


I finally posted my video of Jamie "The Bear" McDonald taking down Mad Greek Deli's sandwich challenge. The event took place in mid-March, right before my L.A. trip. Max Carnage of the Big Eaters Club also attempted the challenge and gave it a valiant effort.

I participated in the 2nd Annual Massive International YouTube Food Challenge a couple weeks ago. I thank Cult Moo and The Deadly Sins for allowing me to participate. Basically, one person or a team of two had to eat 10 McDonald's hamburgers (cheese and vegetables optional). I did a solo run with 10 hamburgers while adding my usual spicy twist. Didn't come close to winning anything, but it's all in good fun. And hey, more people know about my channel now.


Naader and I celebrated National Grilled Cheese Month with a collab video. He stuck with a tasty grilled cheese from Mix 'n Munch in SoCal, while I wanted to construct a mini version of something suited for Epic Meal Time. Mmm...a pound of bacon.


And never fear, I returned to my stupid panda moments when I got home. It's one thing to enjoy spicy chocolate. It's totally another to add pepper extract to that spicy chocolate and shove it in your mouth. Had some lovely capsaicin cramps later that night.


Erika, a fan from Alberta, Canda, sent me a box a few weeks ago which contained some awesome Canadian goodies that I've never had prior to that video filming. It's easily the longest video on my channel, but well worth the time to check out -- especially if you haven't seen these treats before.


Next week, I'm planning to drive up to Seattle for some more major fun. Should be filled with a lot of delicious food and perhaps a couple of food challenges. Randy Santel mentioned that he will be in the area again, so it would be cool to meet up at least once while I'm there. I had a great time hanging out with Randy last year.

I'll be back in a few weeks with more videos! Until then, please subscribe to my YouTube channel to get the latest uploads! Yup, it's free to subscribe. :-)
Posted by Aaron at 11:00 PM