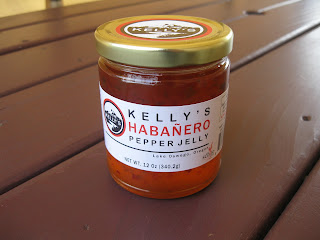 The six participating food carts:
On April 17, three judges went to all six food carts to taste each creation:
Each of the six food carts created a dish using Kelly's critically acclaimed habanero jelly. The maximum possible score was 20 points: 10 for taste, 5 for creativity, and 5 for presentation.

On April 20, I went out and tried five of the six dishes. Unfortunately, PBJ's Grilled was unable to serve their sandwich to the general public at their NW 23rd cart. According to PBJ's business Facebook page, that Kelly's Jelly special will be sold for a limited time at their second cart when that opens in the near future.

NOTE: If I had it my way, all six dishes would stay on their respective menus forever. I'd even be happy if it became one of those "secret menu" items. Huge praise for all the participating food cart owners!

First on my list was Fried Egg I'm in Love near SE 32nd and Hawthorne. Jace and Ryan served up the "Habanerosmith" ($8.50): ribeye steak, Kelly's habanero jelly, cotija cheese, marinated onions, cilantro, and a fried egg. As always, the sourdough bread for the sandwich came from Portland French Bakery. 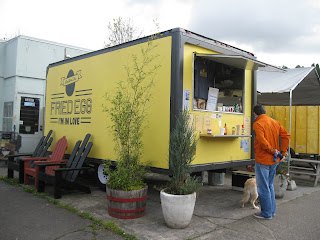 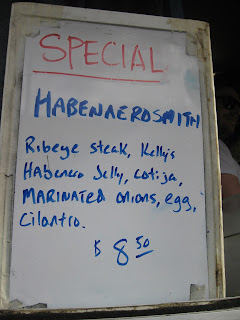 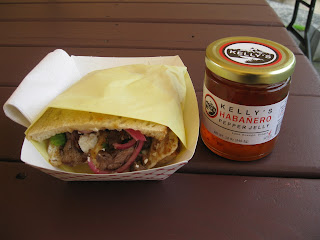 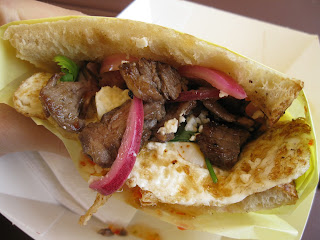 Such a delicious sandwich. I strategically bit into the yolk on the first bite and pretty much spent the rest of the time being a messy panda. The creaminess and saltiness of the cotija worked against the jelly's sweet-heat characteristics. A bit of crunch and bite from the onion. The juicy ribeye steak strips satisfied my carnivorous side.

My next stop was The Gaufre Gourmet (SW 9th and Alder) in downtown Portland! The special there ($7) starts with one of their liege waffles, topped with prosciutto. Goat cheese is rolled in crushed pistachios, then sliced and placed on the prosciutto. Watercress is dressed with olive oil and white balsamic vinegar. A dollop of Kelly's habanero jelly goes on top. It's then finished with cracked black pepper and Himalayan pink salt. The description alone is a mouthful, isn't it?

(NOTE: A slightly altered version, dubbed "The Spicy Goat," uses peppered salami and arugula in place of the prosciutto and watercress. This dish was the overall winner at the 2013 Portland Summer Food Cart Festival in June 2013! As of August 2013, The Spicy Goat has become a regular menu item!) 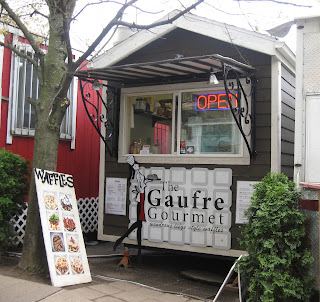 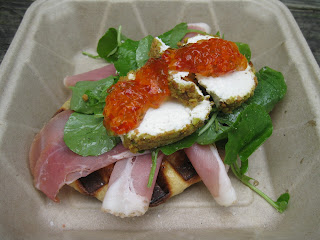 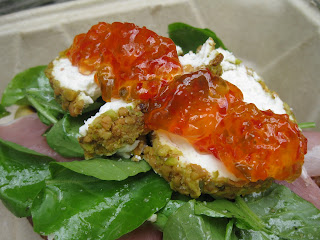 This waffle looks like something you'd find in a gourmet restaurant. Amazing visual, beautiful colors. The tastes were spot-on balanced. A bit of sweet, savory, nutty, and creamy in every bite. I could still appreciate the slight kick from the habanero jelly. The waffle was awesome as usual; a hard, crunchy outside and an inviting inside. 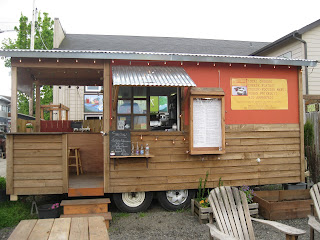 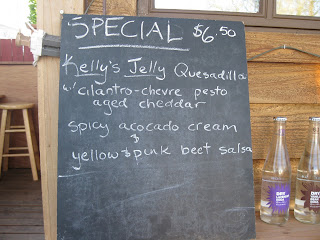 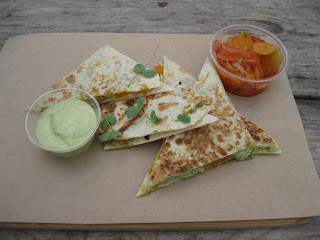 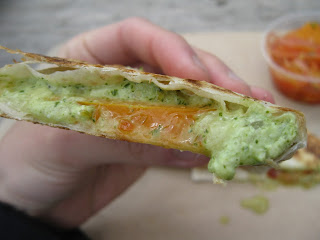 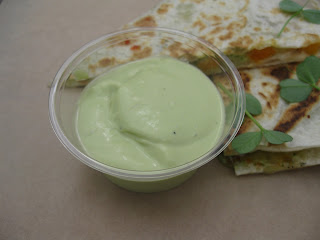 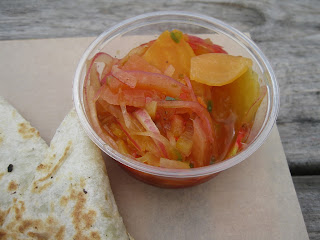 I loved each element. The cutting board.presentation is unique and puts a smile on my face from the start. The quesadilla was grilled perfectly, possessing various flavors and textures that all just work well. The beet salsa was delicious. Sweet and crunchy, with the slightest habanero sensation. The avocado cream surprised me a bit, since I didn't expect habanero to show up there as well.

Then I combined all three -- quesadilla, salsa, and avocado cream -- and I probably shoulda done a happy panda dance on the spot. Yum.

Because 808 Grinds isn't usually open on weekends, I quickly met up with Kelly at Williams-Sonoma, where she was promoting her line of jellies. Jensen and Kevin prepared a pineapple upside-down cake using Kelly's habanero jelly, and Kelly hooked me up with a leftover slice.

The pictures of the food turned out a bit dark, but at least that doesn't alter flavor. 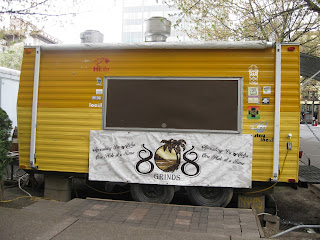 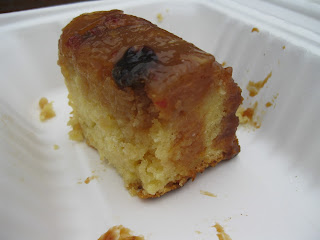 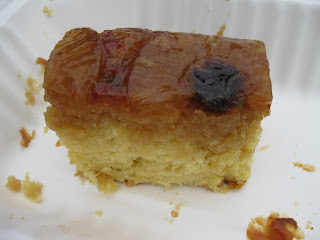 Being the only true sweet entry on the list (all others have savory elements), it's fitting that I saved this for among the last items eaten on this day. I love pineapple upside-down cake that much more now. Nice sweetness, but not overly sweet. I could still detect a slight heat from the habanero jelly. Took me a few seconds to wolf down and carry onward.

Kelly mentioned that Koi Fusion's Stadium location on W Burnside (near Jeld-Wen Field) had the Kelly's Jelly special. Since it was literally a few blocks from where I was, I quickly hoofed down there. 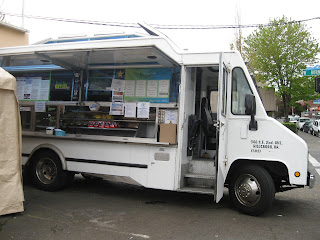 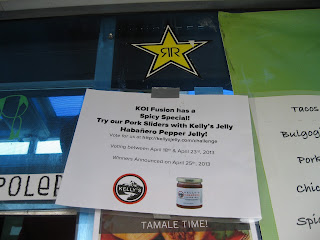 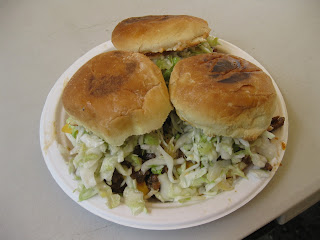 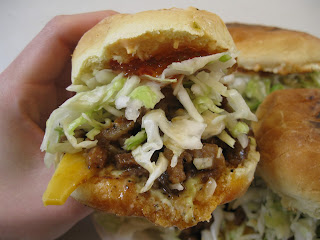 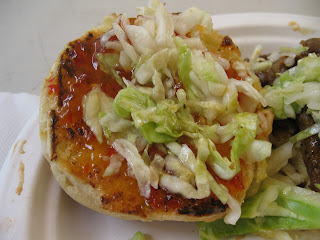 I've had the tacos and the rice bowl here, but damn, these sliders might be my new favorite menu item at Koi Fusion. Toasting the bun is already a plus in my book, but having it still be fluffy makes it a double win. The marinade used for the spicy pork is just addicting. The sesame oil and rice vinegar add a pleasing flavor to the slaw without overpowering anything. I'm still able to enjoy the Kelly's habanero jelly.

Having never had the Koi sliders before, I wasn't expecting a plateful of food. Happy stomach!

On April 25, Kelly announced the winners on her Twitter page. The Cheese Plate won the Judge's Choice, while Fried Egg I'm in Love took the People's Choice award.

Frankly, we're all winners here. Great food from awesome people, and even us customers got to savor every bit of this habanero ride. I look forward to seeing what happens next year!
Posted by Aaron at 11:00 PM