Ingrid's Scandinavian Food is located at the Tidbit Pod (SE 28th Place and Division) in Portland, Oregon. This cart opened in mid-August 2014.

Of course, Portland has had other Scandinavian carts and restaurants (i.e. Viking Soul Food and broder). With Viking Soul Food opening on a limited basis these days, Ingrid's hopes to fill the void in the food cart community.

Like Viking Soul Food, lefse and meatballs are two of the main attractions here. Savory or sweet lefse options available.

I tried the Salmon Wrap ($7.25): smoked salmon, hard-boiled egg, watercress, cucumber, chevre, and mustard-dill sauce inside lefse. A good wrap with refreshing qualities. There's a fair amount of salmon in here, which I liked.

It's quite a small portion for my liking. I'd probably eat five of these before I'd notice my wallet tapping me on the shoulder to remind me how much poorer I've gotten.

A few nights later, I returned for some deep-fried Norwegian meatballs (three for $4.50). Large meatballs surrounded by a medium-sized layer of smooth, fried batter. The exterior on these meatballs was greasy, and I'm sure there are guilt-trips heard around the world after eating three of these. Flavor was fine. 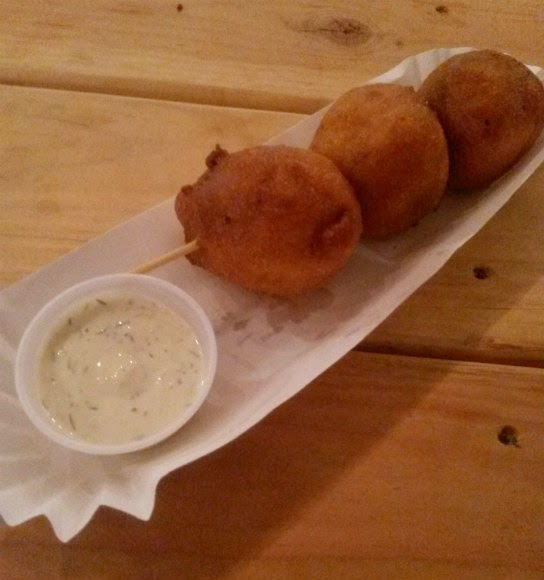 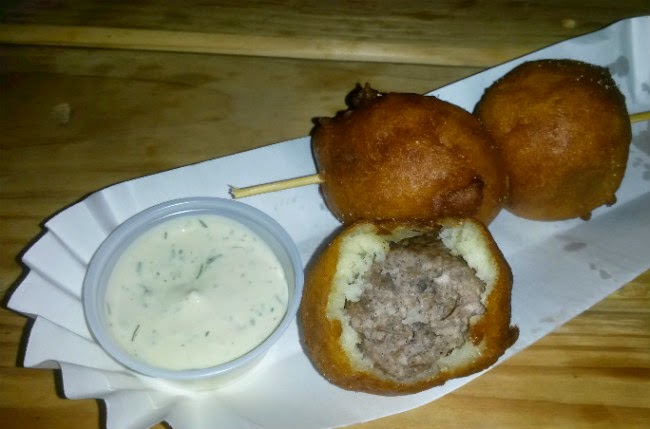 The meatballs come with your choice of creamy sauce (dill, mustard, Norwegian cheese, or horseradish). I thought the creamy dill was a good choice with this.

So basically, lefse is a good choice for a light snack. Sick gluttons may like eating a ton of meatballs.

With the foot traffic on Division, Ingrid's should get some good visibility. 6.5/10
Posted by Aaron at 11:00 PM