(NOTE: Breakside has added one more location since I published this post; now with three spots)

Breakside Brewery has two locations in and around Portland, Oregon. This blog post just covers the spot on NE Dekum (Woodlawn neighborhood). 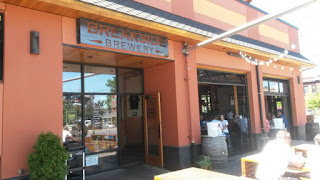 Stopped by on the Fourth of July around lunchtime -- before the temperatures soared into the 90s. I hoped to get a spot at the bar (especially to watch the third-place game for the Women's World Cup) but it was practically full. I nabbed a seat in the back left of the building.

The original Milwaukie spot also houses the actual brewery, and it appears that the NE Dekum spot only has a limited selection. If you want the full range of taps, head to the other location. Both locations have bottles of Breakside beer for sale.

I started with a pint of the India Golden Ale ($6), a double IPA that brought out so many Pliny the Elder qualities. At 8.1%, it was refreshing and drank very easily. Naturally, the ABV eventually caught up to me. 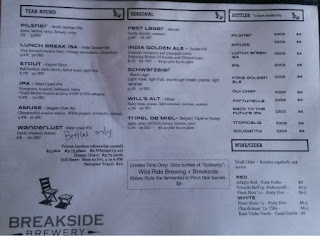 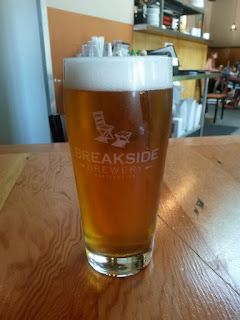 I've already praised Breakside's flagship IPA to no end. There's a reason that beer got fourth in a 2015 blind taste test.

I ordered the Ahi Tuna Sandwich ($14): medium-rare tuna topped with avocado, field greens, sriracha-lime vinaigrette, wasabi, and pineapple-mango salsa, all on a brioche bun. A delicious sandwich that struck a wonderful balance of citrus, fruit, wasabi, and fish. While most tuna pieces were medium-rare, a couple of pieces appeared a bit more well-cooked. Regardless, every piece of fish was juicy and separated with little effort. There was also some serious height on the sandwich. Panda approves. 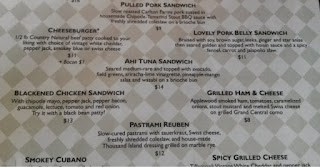 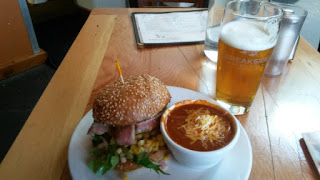 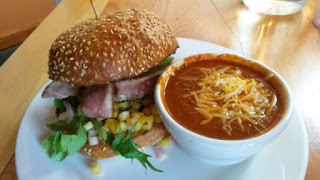 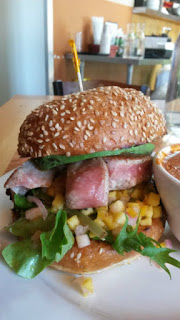 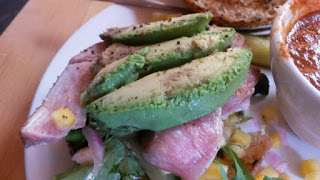 Sandwiches come with choice of chips or soup. When told they had a Chipotle Tomato soup, I had to get it. Simply outstanding. Pleasurable heat and a wonderful essence of smoky chipotle throughout. 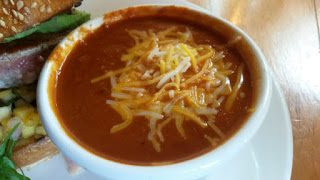 Breakside already offers amazing beer, but I was pleasantly stunned by the quality of their food. Combine that with a TV (to watch a sporting event) and great service, and you pretty much have all that you need.

Portland's abundance of breweries and top-notch food spots really force establishments to elevate their game. The customer truly wins.in Portland. Head to either of Breakside's locations for a beer and some great food! 9/10
Posted by Aaron at 11:00 PM