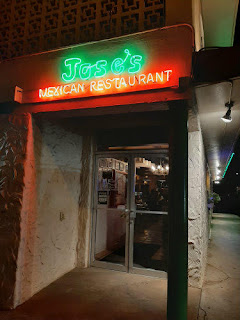 My friend and I randomly picked this spot because he wanted dessert and I needed something to eat in general. It also ended up being a chance to see if Hawaii has acceptable Mexican spots.

As with virtually all Mexican restaurants, free chips and salsa. All good stuff. Any additional orders apparently cost money, though. 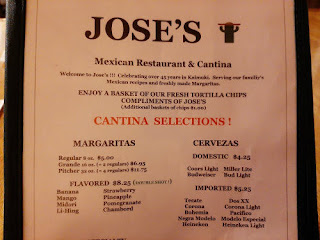 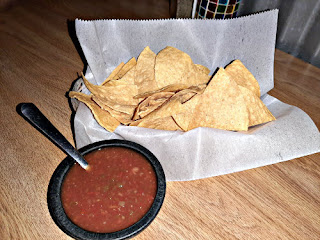 Typical restaurant look inside. It's a limited Mexican menu here; for example, no Arroz con Pollo or Camarones a la Diabla. But interestingly, they have Snow Crab Quesadillas and New York Steak plates.

I had to get the New Mexico Burrito ($17.95) because I'm a sucker for New Mexican food - and I haven't seen many such options in Hawaii. 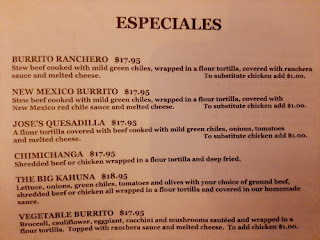 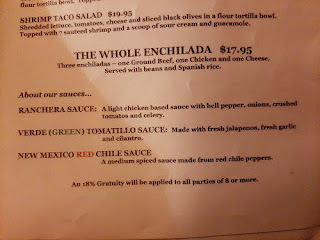 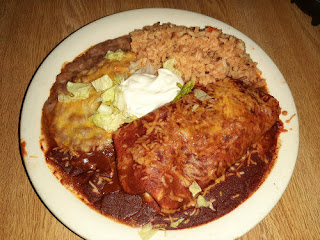 Interestingly, the New Mexican burrito also includes stewed beef - tender chunks of beef, as opposed to carne asada or carne adovada. The burrito is smothered with red chile, which I describe as mild and smoky, with a very slow burn. Sides include rice and beans.

I forgot to get a picture of the meat inside the burrito, but it was pretty good. The burrito otherwise had onions, green chiles, and cheese. Not too large and not filling, so I can't say it was worth its price.

I showed this to another friend (who is from New Mexico) - and she otherwise noted that it apparently is not "red chile sauce", just "red chile. Duly noted.

My friend, on the other hand, gave two thumbs up for his Jose's Sundae ($6.95), a dessert that included coffee ice cream and Kahlua. We both hoped for a larger portion, but frankly, what he got is typical in size for the price.


It was somewhat busy on a Saturday evening, and good service all around.

I didn't come in with high expectations, and Jose's was decent for what it was. I'd probably get something else if I returned, and I'd totally want to get my own sundae at that time, too. 6.5/10
Posted by Aaron at 12:00 AM