(This is the first of a three-part series chronicling OregonMania II, Naader Reda's three-day blitz in Salem and Portland. Part two will be posted tomorrow, 8/21. Part three will be posted on 8/22.)

OregonMania II kicked off on Friday, July 27, 2012, two months after Naader Reda and I set off on our first OregonMania romp. I looked forward to witnessing three more days of Freak domination. But various circumstances forced the two of us to use our backup plans.

I had hoped to have an active presence in OregonMania II for all three days. Unfortunately, stomach flu that I contracted a few days prior threw a wrench into those plans.

Then came the 11th hour backing out of Church St. Pizza. We had hoped for Naader to tackle a 28" dessert pizza on Day 1, mere hours after arriving in Oregon. Demitri later told us he got advance notice of some serious (money-making) business headed his way, so we couldn't fault him for his decision.

Then came Naader's long delay in San Francisco. The plane he was to board needed a replacement part, and subsequent poor communication left all the passengers in the dark about the situation. Originally, Freak8R would have been in Salem by late morning. He wouldn't arrive until after 5 p.m.

Naader and I crafted possible backup plans to fill the void Church St. Pizza left. Our first backup was Adam's Rib Smokehouse and the $19.95 Goliath Burger. It's a 2-pound beef patty and a pound of fries, so it could be close to five pounds with the garden full of veggies and the oversized bun.

My friend Kelly was also starving, and I managed to convince her to do the Goliath Burger as well. We met just outside the restaurant and momentarily savored the reunion. But we were left scrambling once again after being told the restaurant was out of big buns for the challenge burger. The Goliath would also have to wait another day.

Plan C was La Perla Tapatia's 20-Taco challenge, one that I failed a few weeks before with maybe five tacos left. Naader smartly went with variety, getting four different types of five tacos each. While choices like lengua and cabeza were good ones, the chicken again proved very dry and challenging to put down.

But the Freak was on a mission, and the tacos didn't stand a chance. Less than 13 minutes later (official time 12:55), 20 tacos dispatched, and a new house record. 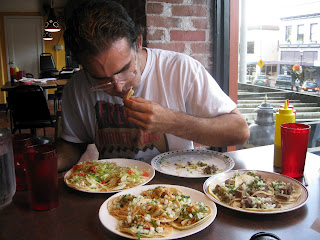 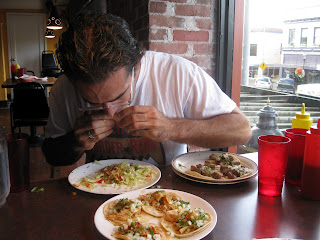 Next up, San Diego Taco Company's 2-pound habanero burrito challenge. Naader requested and received ground beef for his choice of protein. The Wall of Shame now housed 10 pictures. I was the 8th to finish the challenge, and apparently two more people followed my feat. The adjacent Wall of Shame had grown to 64 souls.

When I saw the challenge burrito, I had no doubt in my mind that it was larger than the one I took down. We guessed it had to be in the neighborhood of 4-5 pounds. With at least seven full habaneros (sliced) inside the burrito, plus around a dozen sliced serranos, Naader certainly had his work cut out for him.

Naader loves burritos, and he started strong despite the 20 tacos from earlier. He turned the burrito 90 degrees and attacked with a vengeance. 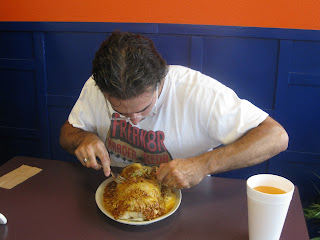 Around halfway through, the Freak was clearly in distress. He drank tons of water, and noticeable sweat formed on his forehead. With several bites to go, Naader's face turned redder, with tons of sweat all over his face. The 20 tacos from earlier still hadn't fully digested, and things looked incredibly uncomfortable. For one of the few times, things appeared bleak.

You only get 30 minutes for the challenge, and the burrito perished in 16. The size and spice of this burrito, coupled with the 20 tacos Naader consumed earlier, ignited a bloat-filled nuclear explosion.

The Freak scored the victory, but the burrito won the war. I had never seen this larger-than-life character in so much distress. And yet, I enjoyed every second of it. You bet I'm a bad influence. Such a sadistic panda. Tsk tsk. 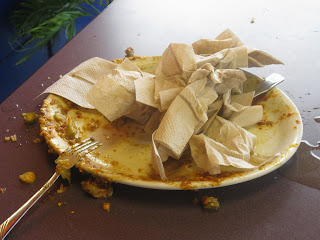 We paid Demitri a visit to round out the night. Perhaps he'll be back on the docket if OregonMania III happens.

Even though capsaicin cramps were imminent, Naader would need all the rest he could to tackle Mad Greek Deli on Day 2. Meanwhile, the spicochist had a nice surprise planned for the Freak's entertainment.
Posted by Aaron at 11:00 PM