After reading a couple months ago that Burger Bungalow added ghost peppers to its "Shut Yo' Mouth" burger, I wrote a note to myself to try the place out once I had a spicy burger craving. While visiting a friend in the Vancouver area, I felt like introducing him to this place while I destroyed my taste buds. 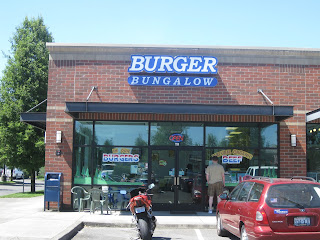 There's no mistaking that I lucked out when attempting the Shut Yo' Mouth challenge back in March. A couple months back, the owners revised the challenge and added ghost pepper powder to the burger. While it may not pack the same lethal punch the Marine burger does (a ton of Mad Dog 357 sauce and four dried ghost pepper pods will do that to you), this Shut Yo' Mouth burger brings some serious heat for anyone who desires something extremely spicy.

When I returned for this burger in early August, my taste buds probably also got jolted more than normal because I had just recovered from stomach flu, rendering me to a largely non-spicy diet. But even had I not suffered that physical setback, this burger probably would still do damage to my insides.

Oh, did I mention the burger comes with a nice helping of fries ($6.49)? Yeah, throw that Shut Yo' Mouth sauce on there as well. Means more ghost pepper goodness! No skimping of heat on this meal whatsoever. I honestly enjoyed the fries a bit more than the burger. While the fry cooking is fairly straightforward, they do it right with a crispy outside and soft inside. Nothing burnt or even overly golden brown. 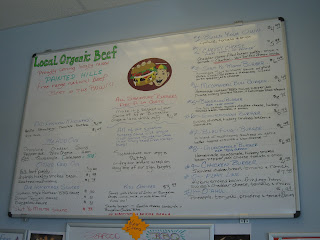 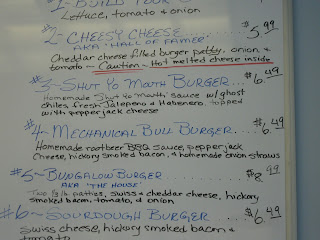 The burger itself is decent. I think this time, I started to realize that perhaps the patty was getting too small for the hearty bun, throwing off the ratio just a tad. It's a 1/3-pound patty, so if I ever learn to just settle for something non-spicy, I'll remember to find a double patty option with bacon (make my own creation, perhaps?). Maybe Burger Bungalow can also follow the lead of other burger joints and add a peanut butter burger option to the permanent menu. And add bacon. I'm a sucker for something like that.

NOTE: Compare the burger I got on this visit to the "Shut Yo' Mouth" burger I got when doing the challenge in March 2012 -- other than I got chips back then:


Burger Bungalow expanded their menu since my last visit, adding an award-winning clam chowder and several BBQ items. There's a small menu board containing a few deep-fried menu items. Too bad I didn't see something like deep-fried Twinkies on there...something like that would really reel me back a few more times. Panda got a serious sweet tooth these days! 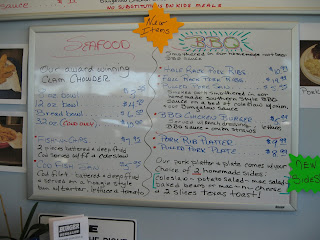 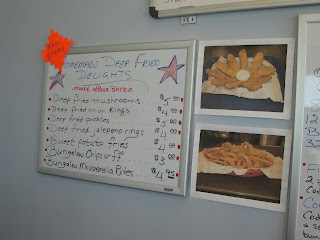 I took more notes down when rating this spicy burger basket. Initially, I tried to do a video, but nixed the idea when I played it back and didn't like how it turned out. I really focused on three areas, all on a scale of 0-10:

Execution (7/10): Very good. Pepperjack cheese melted well. Enough peppers to remind someone it'll be very spicy. Just concerned that the overwhelming heat now will prevent people from enjoying this more than they should. Bun seemed a bit large for the patty and other burger toppings, certainly would enjoy it more with added meat. Can't say enough great things about the fries, just perfect for me. Fries alone scored a couple extra points here.

Taste (5/10): The burger was really one-dimensional on flavor, basically getting a ton of pepper blast in your cheeseburger and not much else. No mistaking that smoky ghost pepper. However, adding their Bungalow sauce would probably tack on an additional couple of points, so do yourself a favor and add that sauce to your burger and your fries. Oh, and one would be even wiser to add bacon to anything. More mental notes for next time!

Spice (8.5/10): Even I was sweating bullets by the time I got halfway through. While the fries will make any challenge attempt easier than chips, I'll probably be smart for a change and spare my stomach the extra agony. No hiccups, a good sign that my heat tolerance wasn't maxed out. Accordingly, it won't attain the highest of marks, but it's still up there. Don't eat this on an empty stomach, or your capsaicin cramps will really sting.

My friend loved his regular, non-spicy burger and appreciated that I introduced him to a new burger place in his neck of the woods. We'll certainly be back for the chowder and much more. 7.75/10
Posted by Aaron at 11:30 PM