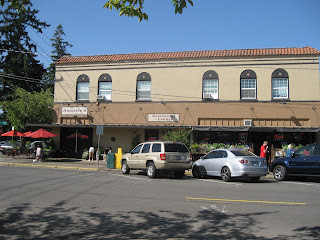 As with my last visit, the interior was very homey, although I probably never mentioned it. My server, Kimberly, provided very good service. I arrived just before 11 a.m. on a Tuesday, already with two breakfasts in my system. The panda felt a third had to be consumed.

I was torn between a couple of options. I initially looked at "Annette's Skillet" ($11.99), basically a starch-veggie-meat-cheese concoction that should fill a normal person for a while. Country potatoes are basically diced fried potatoes. 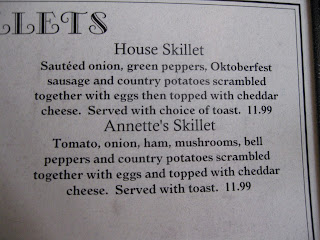 I ended up getting the Seafood Benedict ($12.99): crab and Bay shrimp on a two halved, toasted English muffins, topped with two poached eggs. I got the Hollandaise on the side. It's served with a side of hashbrowns, and I opted for whole wheat this time. 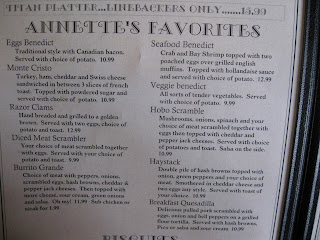 I liked that this place doesn't skimp on the seafood. I'm guessing the crab meat is canned for convenience and to keep costs down, but at least it wasn't the horrid imitation stuff. Delicious, well-prepared Hollandaise sauce. The English muffin started to get a little soggy as the warm shrimp and crab meat sat on it, but the other side retained a little crunch. Accordingly, I personally would like the muffin toasted a little longer.

Eggs perfectly poached. Nothing like cutting into the egg and seeing the yolk run all over the seafood. 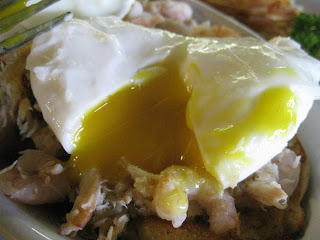 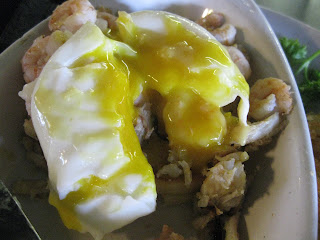 The hashbrowns were very good, seasoned pretty well. Maybe a touch more salt there would be great, as I generally don't use condiments on my starch.

In terms of portion size, this benedict wasn't an overly filling meal, and the seafood here obviously raised the price tag. But I didn't have to look very far for a suggestion that would be more filling for the money spent.

While waiting patiently for my food, I couldn't help but glance at the man next to me receive his Burrito Grande ($11.99). That monster had to be at least two pounds, perhaps getting to three. A giant flour tortilla encases your choice of meat, with peppers, onions, scrambled eggs, hashbrowns, cheddar, and pepperjack. It's then topped with more cheese, sour cream, green onions, and salsa. The man finished about half and (smartly) saved the rest for later. Me? I'd attempt to destroy the entire thing in one sitting and fight off the subsequent food coma....

And that's just what I did on another visit (just yesterday, in fact). The burrito I got clocked in at around 2 lbs. No problem for me, I leisurely finished it in five minutes. Yeah, just a tad hungry. I picked ham for my meat of choice and would have wanted a bit more of that. Other than that and wanting the burrito to be bigger (considering the price), I was very pleased. Very delicious, and I'd recommend this burrito to anybody. 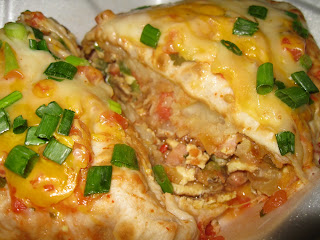 In my opinion, I'm heading to Annette's for breakfast. But as you can guess from my above comments, I'm biased toward a meal deemed to be the most important of the day. Oh, and dessert. Breakfast and dessert. A great combination, if there ever was one. 7.75/10
Posted by Aaron at 11:30 PM