(This is the second of a three-part series chronicling OregonMania II, Naader Reda's three-day blitz in Salem and Portland. Part three will be posted tomorrow, 8/22)

For Day 2 of OregonMania II, Naader's priority was to rest up for an epic showdown with Mad Greek Deli's sandwich challenge around 4 p.m. I finally had gotten over my nasty stomach flu and, after watching the Mad Greek challenge, secretly plotted to take on a small challenge of my own. Would we both succeed?

With several hours to kill, I contacted Chris, one of my law school buddies, and we all checked out the Division-Clinton Street Fair. Vendors line up for several blocks on Division St. and Clinton St. (parallel to one another). The D-Street Noshery food pod conveniently stood right in the middle of everything, and turned out to be a nice lunch spot.

First up for me was a biscuit from Blues City Biscuits, covered in their amazing "chocolate gravy" and topped with pecans, bacon, and ghost chile. This has been one of my favorite go-to carts, especially for spicy items. It's a must-try, in my opinion. 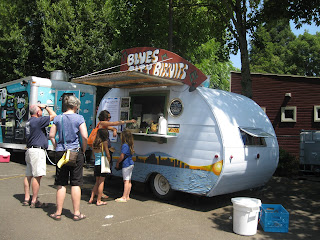 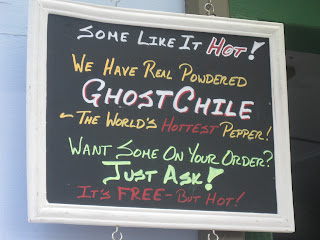 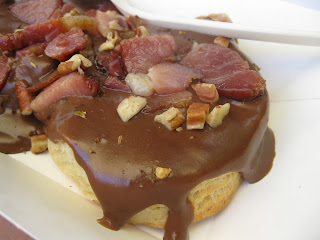 Next, I wanted to check out a cart I hadn't previously been to, so the Gonzo food cart on the other side of the lot got a chance to shine. I highly recommend the falafel sandwich if you go. 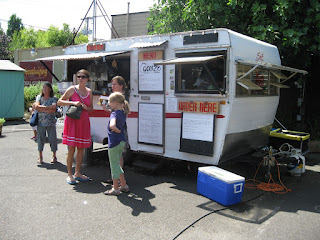 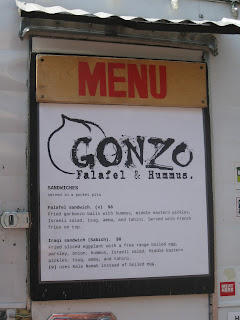 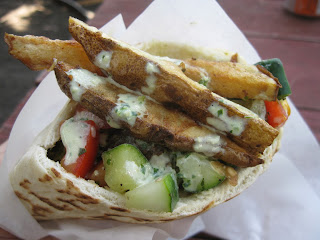 I mentioned to Chris that the Ono Shave Ice cart was across the street, and he jumped at the chance after not having shave ice in about two years. He went all out with the toppings, adding li hing mui powder. Oh yeah, you gotta add everything. Now let's hope Chris doesn't go another two years before eating his next shave ice. 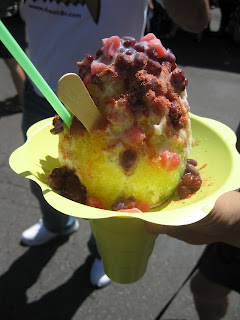 Meanwhile, the Fifty Licks ice cream food truck parked right next to Ono Shave Ice, and Naader couldn't pass up a scoop of Stumptown Coffee ice cream. After enduring all the capsaicin from the previous night, the body surely appreciated this one.

Before long, it was time to hit up Mad Greek. We had attempted to schedule this challenge for OregonMania I, only to learn the hard way that one needs to schedule this challenge with the restaurant a few days in advance. Only the owner can make the sandwich and officiate this one. Even after Naader scheduled the challenge, at times it appeared it still wouldn't take place for reasons still unknown to me. But in the end, all was fine, and the challenge was on. 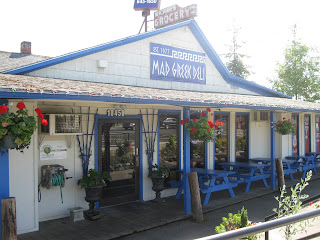 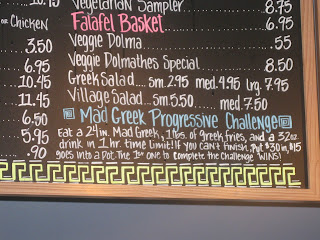 There was a big buzz in the air when word circulated that a Mad Greek challenge attempt would take place at the Rock Creek location. While watching the owner make the sandwich, I quickly saw just how massive this beast would be. The scale read 11.5 pounds just with the sandwich resting on a 3.5-pound tray. With simple math, that's an 8-pound sandwich. I'd seriously need a few days for that one.

Even after all that sandwich, challengers still must eat a pound of their critically acclaimed "Greek fries" (basically JoJos, but don't call them that there!) and a 32 oz. drink all in one hour. That would be at least 11 pounds of food and drink in 60 minutes or less. Daunting, to say the least.

Naader methodically started conquering the sandwich, going with the meat and veggies first. He later mentioned that the hardest parts of the challenge were the salami and pepperoni (dry, salty cold cut meats) and the cheese (which looked like solid store-bought slices). On the other hand, the bread (despite being 24 inches in length) was soft, and that really proved significant for Naader to have a shot. 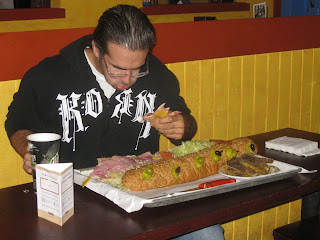 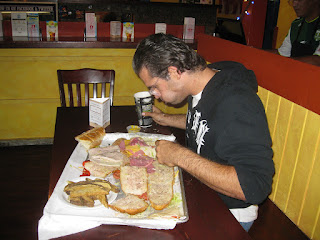 Just an awesome atmosphere. A very supportive crowd grew as the challenge wore on. Naader blazed through 32 oz. of water in no time, and got another pitcher of water for aid him for the rest of the challenge. Much like his strategy when taking down the Brahma Bull tri-tip sandwich on Man v. Food Nation, Naader softened the bread with liquid (water here) to make it easier to eat. 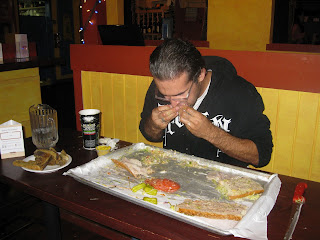 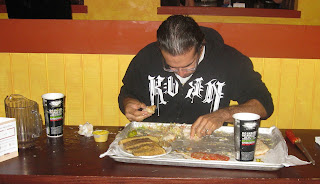 After what seemed like an eternity, Naader finally got the entire sandwich down, and only a few Greek fries stood between Freak and victory. But with so much food already in the stomach, even those delicious fries became a major obstacle. In a smart tactical decision, Naader did what he could to break the fries down. Five minutes remained. Then four. Then three. The tension mounted, as even I began to wonder if there was enough time.

With a little less than two minutes left, the last fry and bits of sandwich scraps went down the hatch. A legendary win -- and perhaps one of the more phony smiles ever (thanks to food overload). 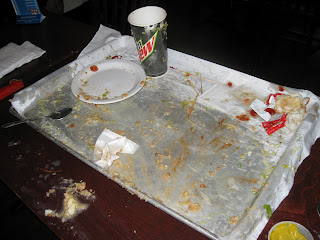 It was hands down one of the most amazing feats I had ever witnessed, and a sizable crowd cheered in approval as the last bite got swallowed.

The food at Mad Greek made me hungry, yet I felt inspired to do a nice food stunt of my own. Naader and I quickly bolted to Voodoo Doughnut's second location in NE Portland, where my friend Kelly met up with us. Simply put, I wanted a Tex-Ass glazed doughnut, the near 1-pound monstrosity that likely equates to six regular Voodoo glazed doughnuts. 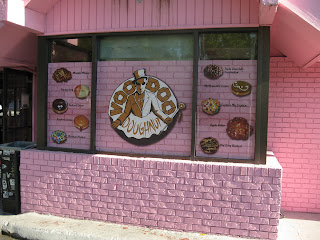 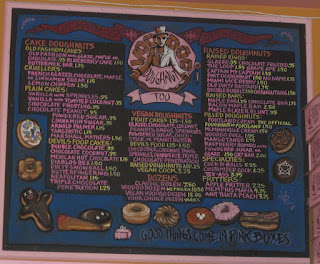 I wanted to videotape myself eating this doughnut with my spicy sauces, so we headed outside for a quieter, less crowded spot. Naader held the camera as I poured Blueberry Hell, Sancto Scorpio, and habanero hot sauces onto the Tex-Ass. After ripping the light, fluffy doughnut into three pieces, I instinctively started speed-eating. In no time, I polished off the doughnut, even without any liquids to help it down. Naader quickly mentioned that I should check the tape, because it seemed like I had eaten it in about a minute and could have possibly beaten the Tex-Ass Challenge had I decided to take it.

The Tex-Ass challenge gives a person 80 seconds to take down one Tex-Ass doughnut. You're allowed a cup of water and can do anything to get the doughnut down, but the mouth has to be clear by the time 80 seconds expire. The time starts on the first bite. If you win, you'll get the $3.95 doughnut for free and win a cool button proclaiming yourself a challenge winner.

After checking the video, I had put the last of the spicy doughnut in my mouth at 60 seconds, with a clear mouth at 69 seconds. Putting little thought in, I agreed to take the challenge right there. That meant I'd have to consume a SECOND Tex-Ass doughnut within a 10-minute span.

If someone takes the challenge, the cashier will alert everyone in the building that it's going down. So basically, I became a celebrity for the next few minutes. After filling my cup with water, I again tore the doughnut into pieces. I then tore through each piece. Dunking each doughnut piece made it disintegrate when it hit my tongue, much like how competitive eaters at the Nathan's hot dog contest dunk their hot dog buns.

After only 50 seconds, I had slayed the Tex-Ass Challenge -- and got a huge sugar high for a nice reward. Some of the employees said it was a record time. It's certainly believable if no one had ever thought about dunking the doughnut, but frankly, faster times are very possible. Even I believe I could go faster if I tightened up technique. Don't worry, I don't plan on trying this again anytime soon. I think I got enough sugar in this short time frame to serve me well for the next few months.

It's conceivable that a world-class pro eater could take the Tex-Ass down in about 10-15 seconds if it was fresh, light, and fluffy (like how mine was). I honestly didn't have the challenge planned at the start of the day, but I wanted to at least do something on this OregonMania II blitz.

OregonMania II was quickly ending. Sunday would be more the "cruise" day for Naader, and the spicochist quickly learned not to stray too far from his element.
Posted by Aaron at 11:00 PM