Ice Cream Renaissance is located on Main Street in Vancouver, Washington. Since opening in 2001, they've been touted as having the best ice cream in Vancouver. Being a big ice cream fan, I knew I had to stop by and check this local place out. 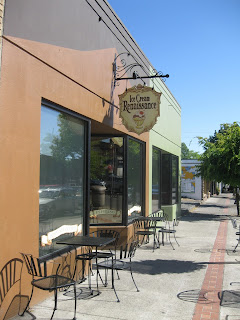 After a brief scan of their business website, I quickly learned they won Best of Clark County Desserts from 2009-11. If they haven't given out the award yet for 2012, I'm sure they will have a great shot at winning again. The Hampton family now runs this place.

When my friend Naader Reda came up for his second OregonMania food challenge run, this was our final food stop before parting ways. Unfortunately, after putting myself completely out of commission trying to eat like a freak earlier in the day, I was unable to savor the sweet bliss Ice Cream Renaissance had to offer. I still watched Naader plow through a nine-scoop "I Need Excess" sundae all by himself. When he comes back, he's doing 12 scoops. Maybe we can craft that into a food challenge. 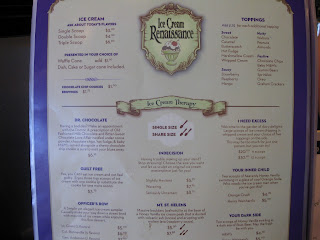 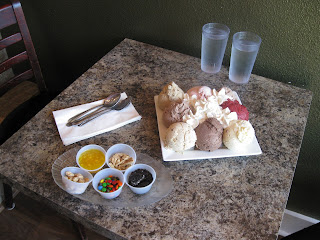 I knew I'd return eventually, and that was the case five days later.

As usual, more tasting. The Coffee Addicts' Choice is the ideal pick for the coffee lover, very strong coffee flavor mixes with the sugary, creamy base. They already offer Nossa Familia coffee, so it seems likely that also goes in here.

Next was Almond Mocha. According to their Twitter feed, this originally stemmed from an accident when chocolate chips found their way into the coffee ice cream. Some almond extract and crushed almonds are added. I personally think they could hold back a bit on the extract; it really zapped my taste buds against the much more mellow coffee. I also think the almond extract affected my ability to taste the chocolate.

The Coconut Luau ice cream was far and away my favorite. It's really coconut ice cream and bits of roasted coconut scattered throughout. Growing up in Hawaii, it took me back to the islands just for a little while. Wonder if getting Hawaiian music to play in the scoop shop is a bit much to ask.

Ice Cream Renaissance's Twitter says their ice cream is "35% overrun," meaning less air than other brands -- and thus more ice cream per pint. Really fooled me there. The extreme lightness and airiness are what really impressed me about this ice cream. It's nowhere close to the denser versions I've had at other scoop shops.

A regular-sized scoop is about $3.25, so it can get fairly pricey. Variety is the only thing I'd hope to experience more of in the future. I'm not sure how often flavors rotate, but I'll have to keep coming back to try more flavors. Or I could go on an ice cream bender like my buddy Naader and get the "I Need Excess." Drop $20 for nine scoops or $30 for 12 scoops. Dairy food baby and a dessert diabetic sugar coma at the same time?