Juliano's Pizzeria is a locally owned, independent establishment located on SE Mill Plain Blvd in Vancouver, Washington. This place has been going strong for over 25 years now, established June 14, 1987. The story goes that previous employees of Flying Pie (Portland, OR) started this location. If you've been to both spots like I have, the similarities in pizza are there -- namely lots of toppings. 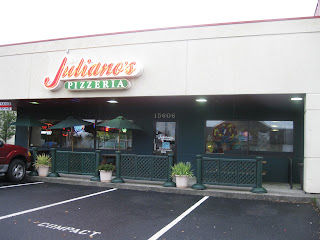 I joined a friend for a late lunch in early November. He had raved about this place a couple of times, so when the pizza bender kicked in, I figured it was time to try it out. The inside has that pizza lounge feel to it, with games isolated in a section of the establishment. Juliano's calls it a classic rock atmosphere, and its inner walls will confirm that. We sat in the middle, allowing me an acceptable view of the cook in the back making pizza.

The dough is hand-tossed, cooked in a three-tier rotating oven. There are basically five sizes of pizza, from the mini 6" pizzas to the 16" XL pies that can reportedly feed 4-5 adults. Knowing my appetite, the 16" may only feed two of me. Oops.

While you can build your own pizza, Juliano's has a number of different specialty pies. Their signature is the "Hurricane," which is basically a supreme pizza. While the prices are steep (a 16" Hurricane is a whopping $30.95), just remember they pile the toppings on like mad.

For my gluten-free friends, they have gluten-free pizza crusts (10" and 14"). I'm not sure how they prevent cross-contamination issues, though.

My friend and I split a 10" (yeah, a good snack for me). I got Hawaiian on my half, while my friend went with Canadian bacon and Italian sausage. A bit of complementary garlic on his half, and I loaded my side up. 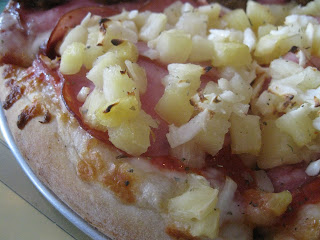 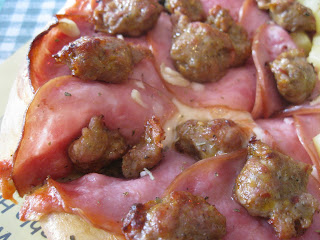 Very good pizza. Thin, crispy crust. Good pizza sauce and fairly light on the cheese. A nice layer of toppings, just as advertised. It'll be a chore to get an intact slice transferred to your plate, though. Also, if you're in a rush, call in your order well ahead of time. Pizzas may take 25-30 minutes to cook, sometimes longer. I'm not sure if our pizza needed that much time, but only because it was a smaller pie.

Meat lovers should get the "Hefty Ho," while the veggie lovers should like choices such as "The Veggie Delight" or "The Grateful Veggie." Personally, the "Santa Fe" (BBQ sauce, roasted chicken, onions, olives, roasted red peppers) also sounds awesome.

Of course, if you want sandwiches, salads, calzones, or wings, Juliano's also has those. They say they have "wings of fire" (buffalo wings), but I doubt they'll ever reach (or would want to reach) the nuclear levels I've faced. Six of those come to $4.95, while a dozen sets you back $9.50. Each sandwich is $5.95, served on ciabatta, and includes chips. Four types (Italian Club, Tastes Like Pizza, Chicken Bacon Ranch, and Gimme the Greek). 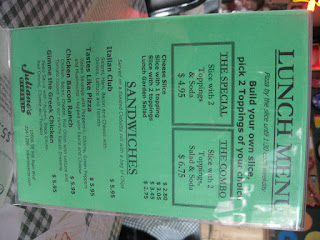 They serve Pepsi beverages. I personally don't drink soda, but it may matter to some people that do care.

Yo beer drinkers! Juliano's has domestics and microbrews. Sizes are pint, small pitcher, or large pitcher. 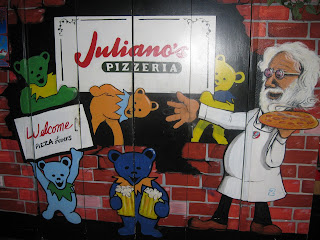 Friendly service -- and I'm tempted to see if I can take down a 12" in under 10 minutes. The server there doubted me, and the panda loves to prove people wrong. I'll be back for sure once my wallet decides to like me again. 7.5/10
Posted by Aaron at 12:00 AM