All's been well on the YouTube front. Thanks mainly to some channel plugging from Naader Reda, I've eclipsed the 100-subscriber mark. I sincerely thank all of you who have watched and shared my videos! It really means a lot to me. 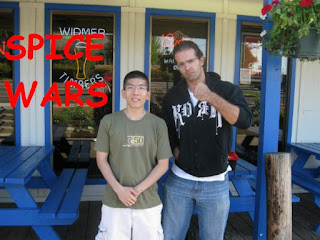 I'm not really planning a video just to celebrate 100 subscribers, but perhaps I'll tie it in with something else. Thanksgiving is right around the corner, then Christmas and New Year's arrive a month after that.

I've been slacking in the food holiday video department. A few November food holidays catch my eye, so maybe I'll do one at some point.

Naader and I have some golden plans coming up in the next couple of months. It should lead to some awesome YouTube material. Stay tuned for that!


As far as the other videos I've uploaded in the past two weeks, you may have seen the words "ghost pepper" a few times. While no one ate a bunch of the actual peppers, I came across some products that brought a combination of great flavor and heat.

First, there was chocolate ghost pepper ice cream from The Last Word food cart in Portland. A wonderful creamy sweet-heat treat. My brave friend ate an entire cup. I plan to top that in a future video. :-)


A few days ago, I finally uploaded my official spicochist review for Mrs. Renfro's ghost pepper salsa. Yup, that'd be the same salsa Naader ate several weeks ago. Real delicious when in reasonable amounts. I can definitely confirm Naader's reactions on his video were not fake. That salsa packs punch.


For some odd reason, I had a Taco Bell craving. It reminded me of those Friday nights in law school. Midnight cravings for food after a couple beers. The food definitely tastes better at that point. I don't really do the alcohol thing much anymore, and it's probably best left that way.

Anyway, I thought the Taco Bell's Volcano burrito was OK. It does its job, but frankly, I prefer the Cantina menu over the volcano stuff. Anything on the volcano menu, for the record, isn't even spicy. But if you love that jalapeno cheese stuff, you should love this.


Being a breakfast person, I saved my quantity food video for last on this blog post. My friend and I took on a 3-pound fried rice omelet at Flyin' Hawaiian last month. Pork fried rice, veggies, eggs. Basically looks like a frittata. And man, it was temperature hot. Just off the stove no more than a few minutes prior. But hey, it was a delicious omelet!

I admit that I'm not a master on eating strategies, so I'm sure I coulda gone faster (I finished in about nine minutes). I used a flimsy plastic fork, too. Probably shoulda brought some metal utensils.

For once, my stomach could rest easy that I wasn't gonna cause another internal nuclear meltdown. And big props to my friend Chris for also taking it down in 12 minutes under similar conditions!


That's all for this update. Keep glued to my YouTube channel for more new videos!
Posted by Aaron at 11:00 PM