King Quesadilla is located at the Green Castle Food Court (NE 20th and Everett) in Portland, Oregon. Dave, the chef and owner, has been in the food business for a while, but only now decided to go with the food cart. His first day was October 19, and I stopped by the following day. 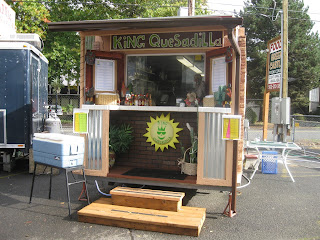 Dave believes a quesadilla is a food without borders. Here, it becomes something similar to what a taco or burrito has commonly become: fusing this Mexican dish with various worldly cuisines. The result? At least eight tantalizing options that you'll be hard-pressed to find anywhere else. 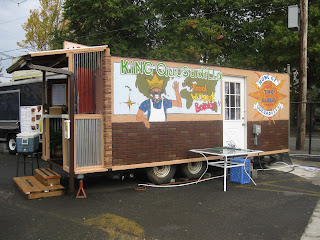 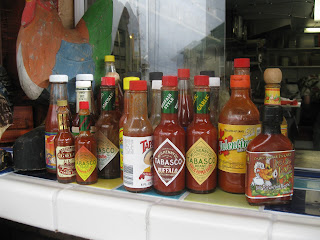 I honestly didn't know where to begin here, so I basically just closed my eyes, spun around a few times, and started pointing to options on the takeout menu. 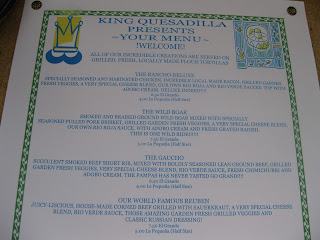 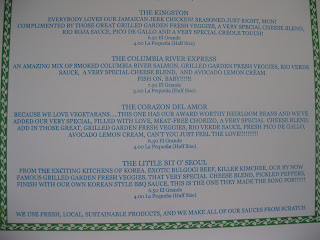 Looks like "The Little Bit o' Soul" was the choice today. Bulgogi beef, kimchi, garden-fresh vegetables, a "special cheese blend," pickled peppers, and homemade Korean style BBQ sauce. It's $6.50 for a "grande" and $4 for a half-size. Grande it is! 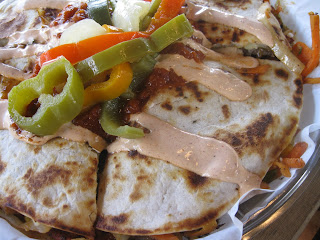 What came to me basically resembled a beautiful Mexican pizza with the Korean sauce and pickled peppers on top. Good bulgogi, very juicy and tender. I personally think more flavor could be added to it. One thing I seek in Korean food is having those flavors detonate in my mouth like fireworks. I thought the vegetables were cooked well. Perhaps a bit more cheese would be nice as well to remind me it's a quesadilla. After all, there was quite a bit of meat and veggies in there.

Other quesadillas I'm interested in include the "Kingston" (using Jamaican jerk chicken and pico de gallo) and the "Columbian River Express" (using smoked salmon and avocado lemon cream). The "Wild Boar" has been popular, and the "Gaucho" utilizes some killer smoked beef short ribs.

A decent first experience. I'm definitely coming back at some point. After all, it's only fair to give these new carts another shot. 6.5/10
Posted by Aaron at 12:00 AM