Roughly one year since my last visit, I returned to Sheridan's in late October for one of their seasonal treats. A spur-of-the-moment decision, really. Turned out to be an awesome choice. 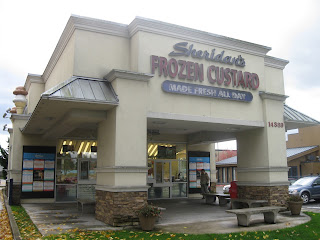 When fall hits, always be on the lookout for the seasonal specials. For the first part of fall, three specials hit the menu. For some reason, I passed on this part of the menu last year, so I guess the cravings exponentially intensified in 2012.

The Chocolate Voodoo Pothole ($5.28 regular / $5.98 large) is the chocoholic's dream, blending brownies, chocolate chips, and hot fudge with their signature chocolate frozen custard, then filling it with dulce de leche. 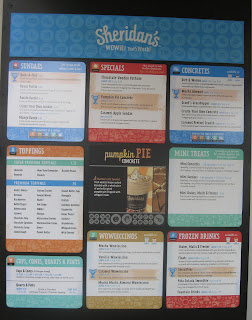 The panda loves pumpkin, so the Pumpkin Pie Concrete ($4.79 regular / $5.39 large) was a no-brainer. Having just finished a nice lunch, I opted for just a regular size this time. Think about it, blend a slice of pumpkin pie with that velvety vanilla frozen custard. Looked like whipped cream on top with pumpkin pie spices. Whomever thought of something like this should win a Nobel Peace Prize. 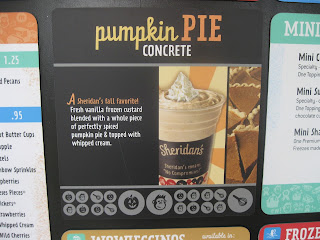 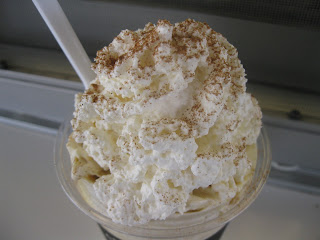 After taking a couple of pictures to intentionally make my friends jealous, I dug in -- and immediately wished I'd have gotten the large. Didn't matter that it was 50 degrees outside. It's panda logic, after all.

I'm a sucker for pumpkin pie anything, so it basically was an auto-win from the start. I liked the silky texture of the frozen custard, and ultimately, the small pie chunks just sold me. Whipped cream and the pumpkin pie spices made for an awesome presentation.

Last year, I lived at least an hour away. Now, it's a few minutes. My stomach just may be seeing this place more often. There's a ton of items to try, but maybe I'll be able to make a dent over the course of time. But all hail the mighty pumpkin pie concrete! 9.25/10
Posted by Aaron at 11:00 PM