I honestly have no clue how my last visit to Shut Up and Eat occurred over a year ago, when it was still a food cart in the A la Carts Food Pod on SE 50th and Ivon. Since then, co-owner and chef John Fimmano opened a 30-seat brick-and-mortar spot right at the corner of SE Gladstone and Cesar E. Chavez (a.k.a. SE 39th Ave.). 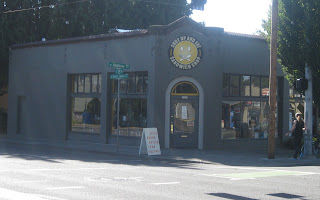 I wanted to hang out with one of my good friends up here, and I am completely jealous that he literally can walk to Shut Up and Eat (SUAE) whenever he's free. Seriously? If I lived where he did, I'd have not only ate the entire menu by this point, but I'd have the belly to prove it. 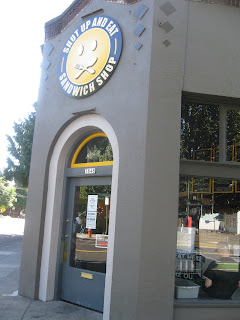 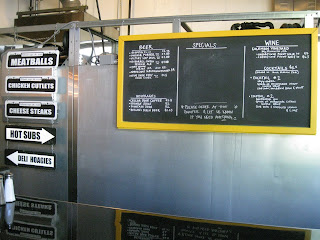 SUAE expanded to a breakfast menu with homemade English muffins and biscuits. Now that's what I want to see...the word "homemade." Yet, with a ravenous abyss for a stomach, the sandwiches always seem to gain the upper hand when ordering.

I really enjoyed the Broad St. Bomber when this was a food cart, and it also got rave reviews from my friend. For me, I got the roast pork sandwich ($8.50). Had to channel a bit of Adam Richman here, since he loves DiNic's roast pork in Philly so much. 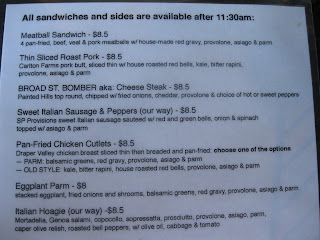 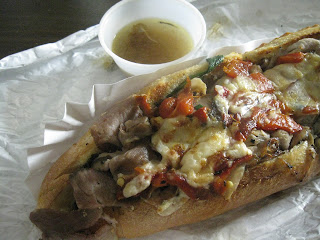 At SUAE, the roast pork hoagie has extra-thin slices of Carlton Farms roast pork, house-roasted peppers, kale, rapini, provolone, asiago, and parm. The bread used here is toasted up and the sandwich is served with a small container of their roast pork gravy/broth. Did I mention that you get a good half-pound of pork? Protein! I'd have to believe John lets the roast pork cool before slicing it paper-thin; otherwise, it'd fall apart. The slices would then be re-heated in that pork broth. I'm a big fan of peppers, kale, and rapini. All great for your health! John melts the cheese right on the roll, and it acts as a glue to hold everything in place.

SUAE gets their bread fresh six days a week (not Mondays) from Pearl Bakery. Especially when toasted, it's one of the best breads I've ever had. Crunchy outside, soft inside. It's well worth the $8.50 you spend.

And damn, they do breakfast sandwiches now, too. On English muffins or herb biscuits (all house-made). I'm looking forward to trying those. Butternut squash, egg, and maple sausage sounds interesting and awesome.

I held off on elite status here last time because I wanted to try the other sandwiches. In my opinion, this visit confirmed that SUAE should get such an honor. I'm pretty confident my personal rating would go even higher with each passing sandwich. I joked to one of my friends -- who can put down a ton of food -- that he should try to eat the entire menu. 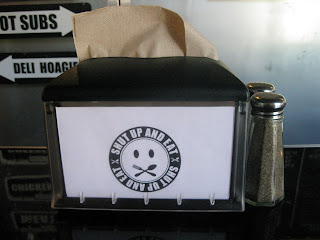 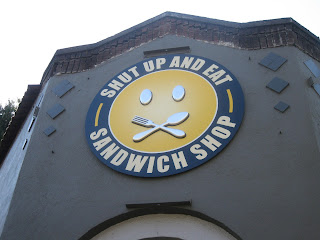