(UPDATE January 2013: Press & Grind has closed. Hoping they will re-launch in the future!)

Press and Grind is a coffee cart located at the Carts on Foster pod (SE 52nd and Foster) in Portland, Oregon. Best friends Janelle and Abbi opened this cart at the beginning of September. 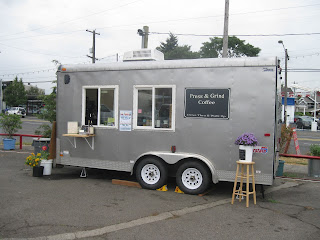 It all started as a dream, wanting to run a business and be one's own boss. Then Abbi learned there was a food cart for sale (all licensed and equipped, ready to go) and pounced at the chance. Not long thereafter, Press and Grind started.

It's a fairly standard menu of mochas, lattes, smoothies, coffee, teas, and baked goods. In a city with a nice array of coffee companies, Press and Grind goes with Portland Roasting.

I'm also a simple spicy panda, normally opting for a regular black coffee. But this time, the special stood out after Abbi raved about it: caramel apple pie latte. What started as an experiment became quite the hit. Caramel, Monin apple syrup, and cinnamon sugar join your usual two shots of espresso and choice of milk. There's the 2% and skim milk options, along with coconut milk, soy milk, and almond milk. 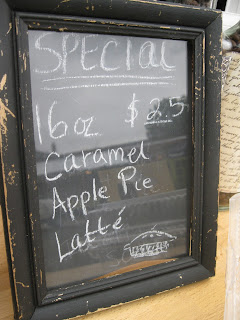 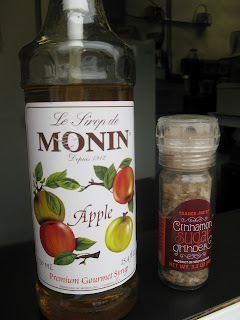 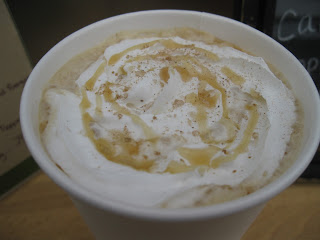 A lovely presentation on top and very satisfying on a cool, overcast day. A great balance of caramel, apple, and cinnamon sugar so that I could appreciate all the flavors. Perhaps it's just me liking to torture my mouth, but I could handle this drink being more temperature hot. A 16 oz. cup on my visit was $2.50 as a special, probably a quarter more otherwise.

Since they're at the end of the pod, there should even be enough space for the cart to operate as a drive-thru. Janelle and Abbi are extremely friendly; check this cart out! 8/10
Posted by Aaron at 11:00 PM