El Sultan is a Mexican and Mediterranean food cart located at the Carts on Foster food pod (SE 52nd and Foster) in Portland, Oregon. While other carts have come and gone since the pod opened up around early 2011, Gus, the friendly owner here, has stayed put.

I got drawn to this cart mainly because it has two of my favorite cuisines: Mexican and Mediterranean. I likely should have gone with the Mexican choices the first time around, but I just craved a gyro this time. 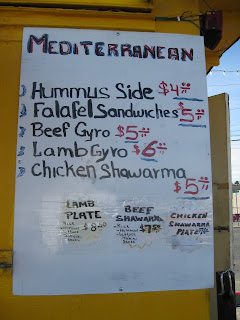 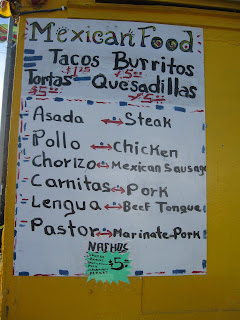 I got a lamb gyro ($6). Lamb chunks, chopped tomatoes, iceberg lettuce, tzatziki, and onion in flatbread. It was just OK. As far as gyros are concerned, I personally prefer the thicker Greek pita because the sturdiness and pliability of that pita makes it less likely that it'll fall apart on you.

The tzatziki had a runny consistency, filled with garlic. It also tasted a bit tangier than other tzatzikis I've had. I found it unfortunate that Gus didn't have feta in the cart, since I felt that would have made the gyro experience better. 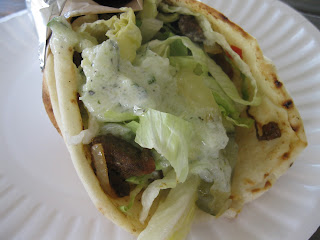 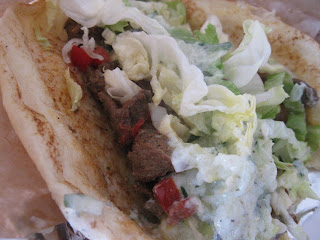 A few weeks later, I came back and had the breakfast burrito. The sign there says it's huge and uses that 14" giant tortilla. I'll admit, though, when I received it, the burrito wasn't necessarily King Kong staring at me in the face. But it is a carbfest with rice, beans, AND hashbrowns inside. I picked chorizo here; you can also just get regular sausage. If you want a non-breakfast burrito, Gus has several more meats on hand for that. 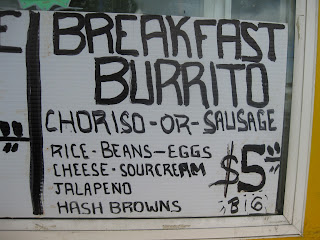 It was a good breakfast burrito. Nothing that will be drop-dead amazeballs, but it's friendly on the wallet and satisfies a normal human's appetite. But it's pretty safe to say I'm no ordinary person.

Gus has three types of sauces for your Mexican food: (1) a green one using tomatillos, jalapenos, and serranos; (2) chile de arbol with tomatoes; and (3) chipotle and chile de arbol. Needless to say, the third one has the most kick.

Gus also serves tacos and tortas, if that's more your style. It might be on the higher spectrum of "A-OK" in my book, but I see myself coming back in the future. 6.5/10
Posted by Aaron at 11:00 PM