Dovetail Bakery is located near NE 30th and Alberta St. in Portland, Oregon. After looking at numerous rave reviews of this all-vegan bakery, I stopped by in mid-October to meet with owner Morgan Grundsfield-Helvey and sample several of her baked goods. 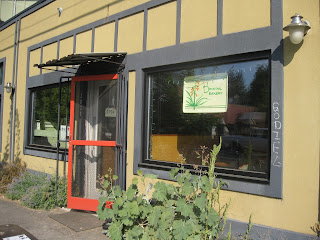 It's a rather simple interior, with the baked goods and cashier straight ahead as you walk in the door. There are a few tables, but I wouldn't be surprised if people are waiting to be seated on weekends. 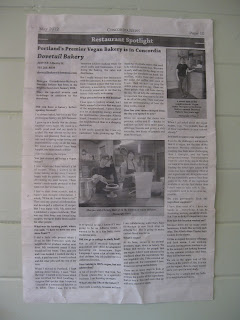 Food has been a huge part of Morgan's life, as she still remembers eating her uncle's peach cobblers when she was a child. In San Francisco during her college years, she baked cookies and sold them to earn some side money and pay rent. Before long, she arrived in Portland and longed to get back in the baking game. Dovetail Bakery started as yet another side project, but soon enough, she had outgrown two other kitchens and found a great spot on NE Alberta.

Why a vegan bakery? Basically a lack of vegan options at the time she opened. When combined with fresh, local ingredients (usually organic) and avoiding the processed stuff, you'll be enjoying food that's better for you than similar eats at other respected places.

Vegan substitutions like Earth Balance, egg replacer (a leavening agent), coconut milk, and soy milk are used in many of Morgan's recipes. I honestly intended to try just 1-2 products and write my review, but I've quickly learned that I have zero willpower when it comes to sexy-looking baked goods and pastries. So it should be no surprise that I went in here with a happy wallet and walked out with a bunch of sugar -- on more than one occasion.

I started with some coffee from Courier Coffee Roasters ($1.50 to $2.25). Dovetail grinds fresh whole beans and places it in a French press. Yup, there's even a YouTube video out there where Morgan lets it steep for three and a half minutes before pressing all the coffee grounds to the bottom. It tastes more like a lighter roast with an exotic twist. I'm honestly more of a straightforward, bold, dark-roast fan, but this was fine. 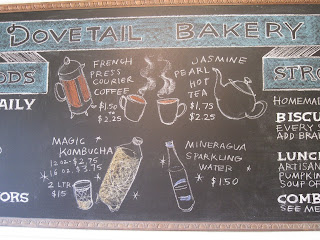 Dovetail's signature pecan sticky bun ($3.75) was the unanimous winner. A ton of gooey awesomeness. Hell yes to the stickiness. Pecans on top also added wonderful texture contrasts. Not surprisingly, I wanted to eat several more of these. Screw the food coma. Screw any diet or detox. This is one of those "5/5 panda-approved" pastries to roll around in. Finger-lickin' awesome. 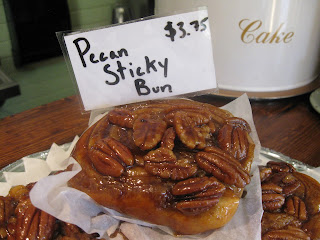 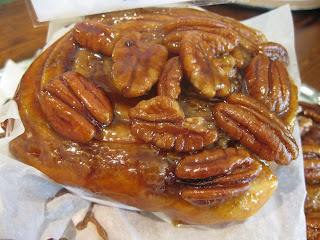 The cinnamon bun ($3.50) has some good size to it. I've been a cinnaholic for years, so it should be no surprise that I went to town here. The vanilla glaze on top uses organic powdered sugar and Mexican 4-fold vanilla, bringing out intense vanilla flavors that work well with each layer of cinnamon and brown sugar. Oh, and Dovetail also has house-made brown sugar with cane juice, organic blackstrap molasses, and a hint of cinnamon. 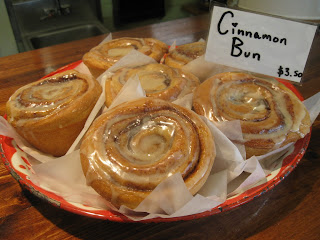 I really enjoyed the blueberry muffin ($2.95). The granulated sugary coating on top (evaporated cane juice sugar) paired well with the fluffy inside. A bunch of fresh blueberries from Stahlbush Island Farms blotched most of the muffin like it was an art canvas. Somewhat messy, in a good way. 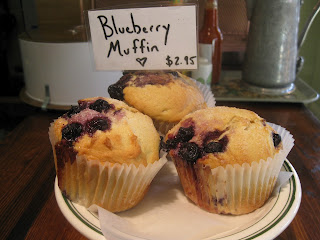 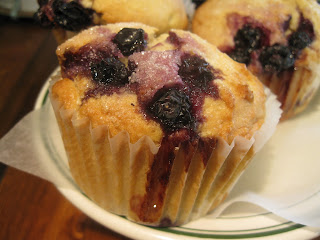 If you like a more savory baked good, check out the Apple Rosemary scone ($2.75). You'll get a hint of fresh rosemary in every bite, and the diced organic Gala apples Morgan uses keeps consistent with her goal of fresh, clean flavors. Being a more savory baked good instead of sweet, this scone was one of my personal favorites. The panda's body doesn't necessarily handle excess sugar well. 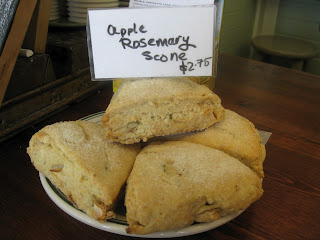 The Almond Chocolate Cup muffin ($2.95) has slivered almonds and semisweet chocolate chips on top, along with Wholesome evaporated cane juice sugar (think something similar to Sugar in the Raw). I admittedly wasn't ready for the burst of almond extract that mostly collected on the top.

I should note that I've also had a banana bread addiction for many years. A moist slice at Dovetail ($2.50) gets the nod because it keeps such a balanced feel. It's not too sweet, and the chopped walnuts add a great texture contrast. Camas Country whole wheat flour is used, so again, it's local ingredients and that much healthier! 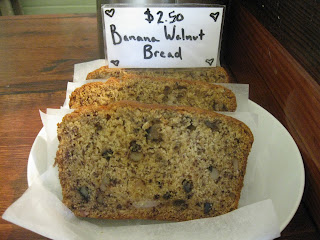 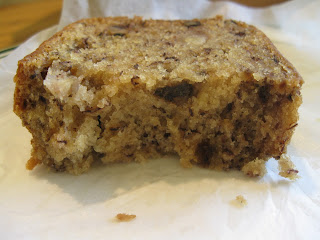 Don't forget about the cookies here, and they all got a bit of size to them! I'm basically dancing over choosing the Salty Sweet Trail Mix Cookies ($2.35). Picture a kickass oatmeal cookie, then add some more dried fruit, chocolate chips, and nuts to the party. You'll come up with this rockin' item. Most of the ingredients come from Mt. Rainier Organic Trail Mix. 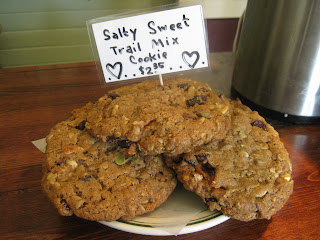 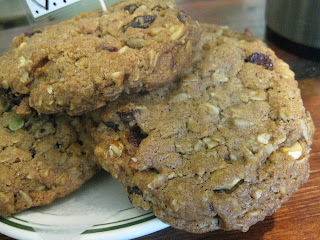 I had to have a Lemon Blueberry Scone ($2.75) as well. The Stahlbush Farms blueberries are back for this one, creating fruity pockets on the exterior. But it's the refreshing, addicting glaze on top that makes it a winner. I love blueberries, don't get me wrong, but I'd want an exclusive party with the lemon glaze. 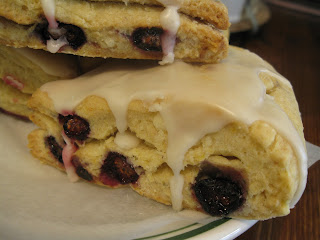 The sweetness in each of these items had either a tangy tone or a slightly sweeter node than normal. I'd theorize the soy milk could have had something to do with that. It's not off-putting to me, but still something I had to note. It also may cost a bit more to make these products vegan, but I had no complaints. I'll be dreaming about pecan sticky buns anyway.

As far as savory items go, Dovetail also has a few of those. Contrary to what I originally thought, the Pumpkin Chili ($3.75 cup, $4.25 bowl) actually runs year-round. If I saw correctly, it seems to have an awesome light orange color. There's also a rotating soup of the day ($3.75 to $4.25) that may be gluten-free. Sandwiches are $6.50 and served with Juanita's corn chips. On weekends, Dovetail serves up their biscuits and gravy ($6) which has received rave reviews. Add braised greens to it for $2.25 more. I hope to return for that!

NE Alberta continues to show me it possesses a Murderers' Row of awesome eateries. Morgan and her staff were extremely friendly. I could camp out in Dovetail, eat everything in sight, and become a fluffy panda overnight. Sounds like a lovely way to end the post and go hibernate. 8.75/10
Posted by Aaron at 11:00 PM