In October 2012, Big-Ass Sandwiches moved out of the Old Town area and set up shop in a new "superpod" near SE 2nd and Oak. The menu, complete with weekly specials, remains the same. I visited on a couple of occasions in the last few weeks.

Admittedly, parking can be tricky at the new pod during the weekdays, but one thing's for sure: the gloomy winter weather doesn't keep the die-hard fans away.

Ever since Big-Ass Sandwiches appeared on Adam Richman's "Best Sandwich in America" (and won the Pacific Northwest region), Brian and Lisa Wood have constantly seen long lines. During the summer, it took anywhere from 2.5 to 4 hours to sell out for the day. Now that the slower fall rush has set on Portland's food cart scene, it should be a lot easier to get your BAS fix.

Since I've had the traditional Big-Ass roast beef already (and the spicy Secret Aardvark habanero sauce is a must), I tend to focus my orders on the specials.

"Nacho Fries" ($5) is a side item on the list, and it's a perfect item if you're either a vegetarian or watching the carb intake a tad. Fries get coated in the Wood's signature bechamel cheese sauce, with grilled onions and jalapenos. Aardvark sauce can be optional if you are timid about heat, but it's a requirement for my portion. Don't be surprised if I double my Aardvark intake here. 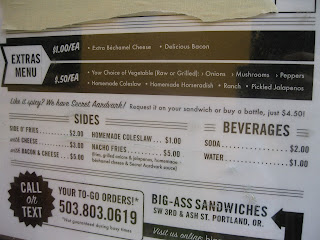 Brian and Lisa ran their Thanksgiving special ($10) for two weeks this year. Roasted turkey breast (yeah, the real deal), sweet potato and sausage stuffing, homemade turkey gravy, and fries. The stuffing also incorporates rosemary, walnuts, and dried cranberries. Despite how laborious the prep is, I honestly wish this sandwich becomes part of the permanent menu one day. While the turkey and stuffing are awesome, for me, the rosemary is the ingredient that sells me. Walnuts add a great texture contrast. Large sausage chunks in the stuffing. As always, the delicious Secret Aardvark habanero sauce comes through with that pleasing spicy kick. 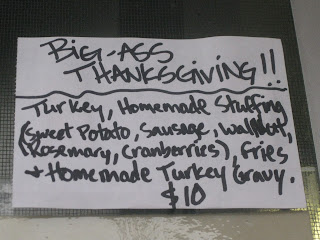 More cranberries were reportedly added to the stuffing this year, but I could honestly welcome even more cranberries to the mix. I'm a huge fan of sweet-savory mixes, so I might have a few dissenters on this.

That Gutbomb ($9.50) always stares at me, and frankly, it's very appealing for its larger portion size. But the curious panda says those specials must overrule the Gutbomb. What a conflict to be in....

If you're the adventurous type like me, you really can't go wrong with any of the specials. But even for the purists that may want a Big-Ass roast beef (or whatever else strikes their fancy), this is a great food cart to go to.
Posted by Aaron at 12:00 AM