I returned to Moberi in mid-January to pay Ryan a visit. In particular, I dropped by to try one of the protein shakes on his menu. 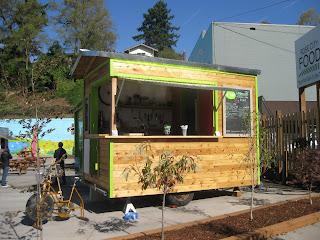 I've taken a couple of my friends here, and we've all enjoyed the smoothies ($5.75). The Moberi, Turtle Power, Uncle Jesse, and the DeLorean are all delicious. I find it hard to just narrow it down to one personal favorite. It honestly would depend on what I craved on that particular day. 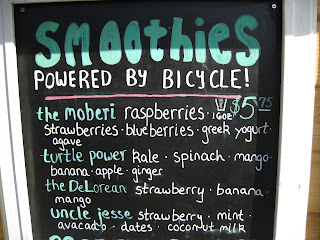 But finally, I tackle the protein shakes! Each is $6 for a 16 oz. serving. Considering there's a gym next to the Rose City Food Park, it's a perfect spot for people to come by before or after a workout. Ryan said the "Captain Planet" has been a hit with the workout people. It's a green protein shake, pretty much the "Turtle Power" with hemp protein and apple juice added in. 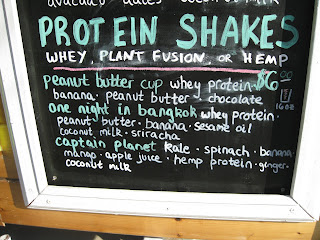 The "Peanut Butter Cup" is also popular because, heck, it's got peanut butter and organic chocolate in there! Add a banana and some whey protein. Win.

For the spicy panda? "One Night in Bangkok" it is! Ryan admits it's a more adventurous option, but to me, it's a winning combination. Whey protein, peanut butter, banana, coconut milk, sesame oil, and sriracha. Yup, you read those last two ingredients correctly. You'll taste the peanut butter first, with the sesame oil and the spice of the sriracha hitting on the back end. It's an awesome combination, should you like the spicy and Thai flavors.

That "One Night in Bangkok" protein shake got Ryan and I thinking about a possible spicy food video I could attempt. Basically, no one else should attempt what I do because I love testing insane heat levels and bizarre combinations. But feel free to get some great smoothies, juices, and shakes from this food cart!

Moberi also has Townshend's Tea, should you need a hot beverage in such frigid weather! While you're at it, check out the acai bowls and $2 shots. Ginger shot, anyone? 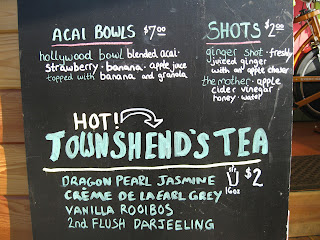 Personally, the protein shake earns this cart an elite rating. I might be a thin, non-muscular panda, but as one can probably predict from light years away, the spice was the determining factor in pushing it over the top. 9/10
Posted by Aaron at 12:00 AM