(NOTE: The Rake & Herald published an article about me! I'm now known as "asbestos mouth" in the UK, lol. Check it out!)

Valentine's Day has come and gone. While many people were probably out spending quality time with their loved ones, I spent it alone enjoying great food. And frankly, I'm cool with that.

Meanwhile, several of us in the YouTube world came together again for another collab on Valentine's Day, the theme being hearts. As you can see from the video below, I took things quite literally. But trust me, it was pretty damn tasty. I'd definitely do it again.

Naader Reda was the mastermind to organize this multi-channel YouTube celebration, using the Twitter hashtag #EatYourHeartOut. Whether you want to call it Valentine's Day or Singles Awareness Day, all of still had to deal with hearts or something heart-shaped.

If you want to watch all the Valentine's Day videos, please check out the Big Eaters Club page!

A bit of back story behind this video: I had a number of ideas for Valentine's Day, probably over a dozen. They included eating 16 oz. of Valentine's Day Peeps to doing a soap opera storyline involving several friends. The storyline wouldn't have been very complex, but still obviously would have taken a lot of work. I ended up at the Asian market one day and saw the chicken hearts. Since they were only a couple bucks, I figured it was worth the money. 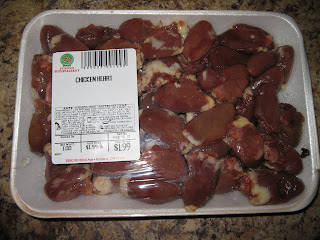 I looked up recipes and a few suggested that I simmer the chicken hearts in water. I don't own a deep-fat fryer, so that was out of the question. I added my usual spicy stuff to it, including ghost pepper powder.

While the hearts cooked in the water, the light bulb basically went off that I could just drink the spicy chicken soup. I tossed in the Valentine's Day Peeps because they were appropriately heart-shaped.

If anything, the sugar hit me way worse. All I got from the soup was a runny nose. A surprisingly filling meal, but I guess that's what can happen when eating a pound of protein and half a pound of sugar.

The Valentine's Day special was the second of two YouTube video collabs that my friend Naader Reda organized for us in the past week. The other: a fun McDonald's breakfast romp. Since I believe breakfast is the most important meal of the day, it seemed logical to eat the entire Breakfast Dollar Menu.

Mardi Gras took place on Tuesday, February 12. While I didn't have any plans this year, I dug into the archives and uploaded a Spicochist Classic from my old channel. My friend had received a king cake, so we hung out and I took home an extra slice, which you see in the video. Let's just say I added a spicochistic twist to king cakes are eaten. I filmed this back in February 2012.


Last week, I went to the Burgatroyd food cart in Portland, Oregon. Jamey (the owner) ran a burger special involving pickled habaneros and macerated cherries. Because a few pickled habanero slices in a burger weren't gonna do much damage, I also ordered four more ounces of pickled habaneros on the side. Much better. I won't lie, I ate enough habaneros to trigger the capsaicin cramps in the middle of the night.


The moral of the story? Don't ever be a stupid panda like me. Just enjoy your meals. Burgatroyd has some delicious burgers, so please head over there if you're in the area.

I only uploaded one Spicochist Review lately, and it's one that was long overdue. I finally reviewed Red Robin's "Fiery Ghost" Burger. For a national chain, it's a damn good burger. As one could predict, it wasn't real spicy, so I added some more heat to it.


I'm planning to be a part of a few more YouTube collabs throughout the year. It's all in good fun and I enjoy seeing how creative people get with a common theme. I'll be back on Monday with another review!
Posted by Aaron at 12:00 AM