The Red Hot is a pub located on 6th Ave. in Tacoma, Washington. This place was featured on an episode of "Chefs vs. City," where both teams had to consume several hot dog creations offered here. Since I was in the area in late January, I stopped by with a friend. 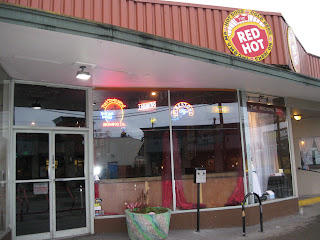 My friend and I heard some great reviews about The Red Hot. It's your typical pub atmosphere. A great beer selection, if that's your thing. There's a TV on the wall to watch some sports. Music's playing. It's loud, but not crazy loud.

Of course, we came for the hot dogs and sausages. Over a dozen types of meat options, with a couple more vegetarian or vegan choices. All sounded delicious and we found it hard to narrow our choices down. One of the friendly servers/bartenders suggested three: 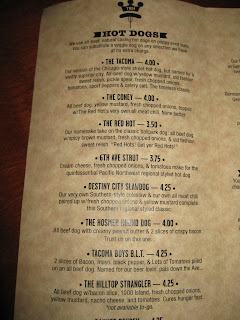 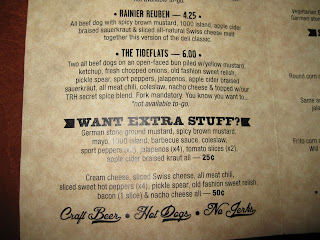 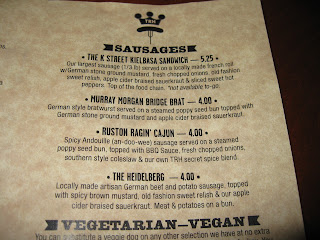 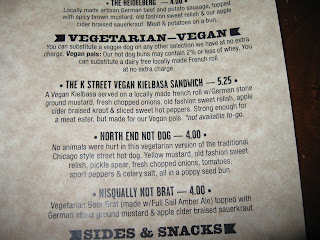 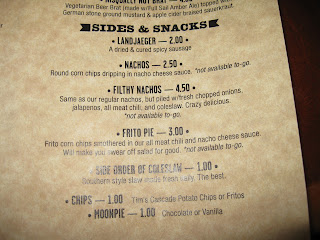 We each had the "Hosmer Hound Dog" ($4), an all-beef dog with creamy peanut butter, two strips of crispy bacon. Served inside a steamed poppy seed bun. My friend was blown away at how good it was. I also enjoyed it and would really have wanted a bigger portion to nosh on. I also think that thicker, smokier bacon would have really sent us both to nirvana.

I also tried the "Ruston Ragin' Cajun" ($4), a spicy andouille sausage served on a steamed poppy seed bun. Topped with BBQ sauce, fresh chopped onions, southern-style cole slaw, and the house secret spice blend. Personally, my favorite of the two I had. A noticeable, pleasurable spicy kick. Fresh slaw and an awesome sweet-tangy BBQ sauce. I wanted to eat at least six of those. 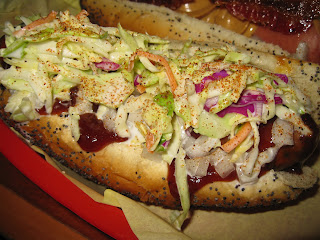 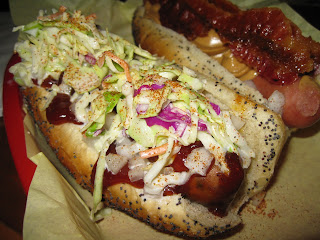 Are you a glutton or aspire to be one? Get the double-dog "Tideflats" ($6). Topped with virtually everything they got. Fork all but required. If only I didn't have that job interview, the panda just may have gone bonkers.