A lot has gone on in my world over the last two weeks. I've gained a bunch of subscribers, and I again thank everyone for watching my videos! One video in particular became a giant hit on my channel, thanks to some great timing and shameless promoting.


When Lay's announced the three finalists in their "Do Us a Flavor" contest, I knew it would get a lot of buzz, so I had to capitalize on that. Luckily for me, I found two of the flavors at a nearby Target and the last one at WinCo. Even a couple weeks after filming the video, I'm happy with my vote. The flavors were all good, but there was one that I thought missed the mark. If you haven't already, check out the entire video above. 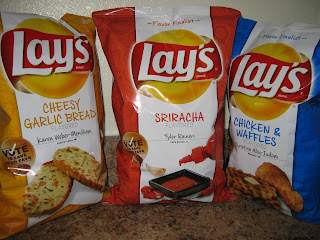 Hopefully you've been able to find at least one of the flavors. Leave a comment on my YouTube video to let me know what flavor you preferred.

I did yet another collab with my friend Naader Reda, and we each did our own challenge including Jack in the Box's Hot Mess Burger. I probably shouldn't have gotten any of these items, but in the end, they weren't too bad for a fast food joint. I thought the shake was easily the best of the three items. Frankly, the burger was way too greasy.


I uploaded two more Throwback Thursday videos, each being spicy food challenges that I demolished without any trouble. Jayson's Habanero Burrito at the San Diego Taco Company (Salem, OR) was a darn good burrito. I became the 8th winner in June 2012, and Naader conquered this burrito the following month during OregonMania II. Unfortunately, I recently learned that San Diego Taco Company closed for business. At least I'll have the memories on video.


Another challenge that no longer exists is the Fire Eaters Challenge at Grass Roots Cafe, a food cart in Portland. The challenge took place one year ago, in March 2012. I took down these "insane heat" wings at a methodical pace in maybe three minutes. The owners here took all the wings off the menu around summer 2012 and decided to focus more on catering events as fall hit. Honestly, I have no clue how much they tried marketing their business. To my knowledge, I was the only winner of their short-lived wing challenge.


Finally, I've also uploaded two more Spicochist Reviews. The Blue Diamond Wasabi and Soy Sauce Almonds were pretty good, and I'd consider getting them again. It's just not something I'd be impulsively buying (or wanting to buy) at every turn. But hey, it's still a healthy snack.


Keeping with the wasabi theme, the Extra-Hot Wasabi Rice Crackers only imposed its evilness when I ate maybe 20-25 at once. Still not bad, but again, I'm probably trying other items before getting this again.


Oh, and for people that I haven't personally spoken to, I recently landed a full-time job, so I won't have nearly as much time here. While there probably won't be an initial slowdown on video content, it probably will end up becoming more a once-a-week or twice-a-week deal. This means I'm probably reverting to a Sunday (once a week) or a Wednesday-Sunday (twice a week) schedule somewhere down the road.

Basically, I will still be uploading new material. I'm not retiring and have no plans on doing so. Have a great weekend!
Posted by Aaron at 12:00 AM