For those not in the know, it's been a crazy past three weeks for me because I've started a new full-time job. I've still managed to get some time in to film my usual spicy food stunts. However, I obviously don't have as much time on my hands to edit the video.

One of my main videos in the past three weeks has to be eating a 12-pack of Cool Ranch Doritos Locos Tacos in one sitting. Taco Bell released this taco at the beginning of March and many of my YouTube buddies jumped on the bandwagon to film videos about it. For me, just a splash of superhot sauce, and I was good to go. 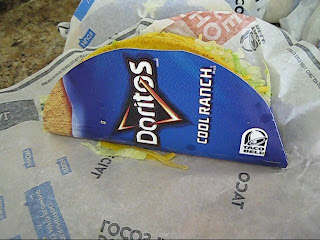 Keeping with the Doritos theme, I filmed a couple of Spicochist Reviews on the Doritos "Jacked" line of flavors. All three flavors were huge winners in my book. While I gave the nod to the Smoky Chipotle BBQ, I still urge people to try the Enchilada Supreme and the Ranch-Dipped Hot Wings flavors.

At the end of February, Portland held its 3rd Annual Cartathlon, where five-person teams race around Oregon's largest city completing various activities and participating in fun food challenges. I volunteered at one of the food challenge areas where teams had to eat a burrito. Six food carts each contributed one random item to the burrito filling, and I had to try it for myself. How does marinated chicken, fries, tzatziki, puttanesca, habanero slaw, and black beans sound? I personally added more habanero sauce and gorged like a messy panda.

I finally responded to Joe Park's "I Challenge U" Jello and Pudding video. Basically, one must eat four Jello pudding cups and four Jello gelatin cups as fast as possible. Yet another fun challenge that I encourage people to try. I went sugar-free for my video.


The stupid panda came out for St. Patrick's Day. I coulda made something tasty, or I coulda stuck with Lucky Charms cereal like several of my YouTube friends. But nope, I had to make a nasty green smoothie. Panda logic....


Please stay tuned in the coming weeks. I recently spent some time with some awesome people who can eat ridiculous amounts of food. I plan to write a couple of blog posts about that. Think of it as another Pro Eaters Week!
Posted by Aaron at 11:00 PM