The Angry Unicorn is located at the Carts on Foster pod (SE 52nd and Foster) in Portland, Oregon. 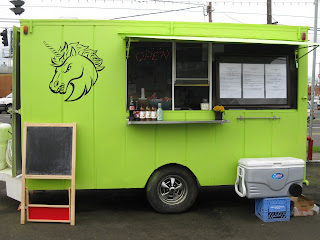 This is a burger cart headed by John and April Scarlett. I have no clue what they love about unicorns, but it sure as heck made me want to try this place. After all, a pissed-off unicorn looks awesome. 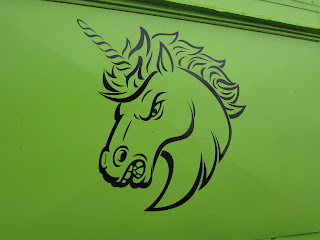 While the name and the logo got me to stop and want to know more, the menu all but sealed my fate to come here for lunch. Bacon everywhere (except for the vegetarian part of the menu). Even ground bacon as part of the burger patty. Whoa, breaking new ground for me! All burgers use fresh ground brisket. 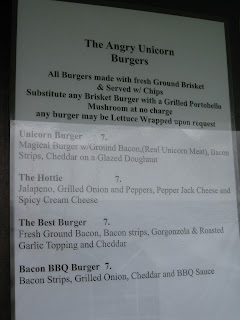 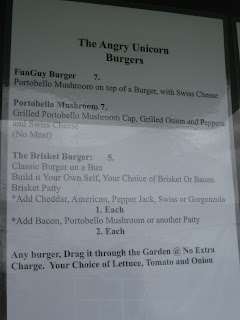 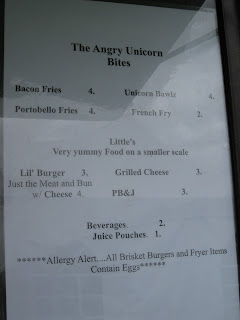 I wasted little time in getting the "Unicorn Burger" ($7), a "magical" patty where John adds ground bacon to the ground brisket, adds cheddar cheese, then puts more bacon strips on top. Then the glazed doughnut. Yup, a Krispy Kreme glazed doughnut. John mentioned he wants to eventually find a good local glazed doughnut to use. John cuts the doughnut in half laterally like one would to make a bagel sandwich, inverting the doughnut halves so the sugary top is right next to the meat. Genius! 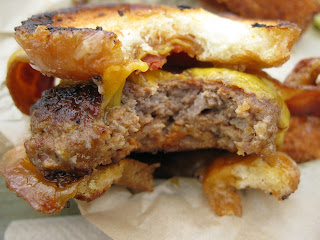 If you love savory-sweet combos like I do, this is for you. Messy, yes. But wow, just awesome. I kinda wish I had two of them to scarf down.

So what fills the void? Bacon fries! It's really bacon strips coated in flour and panko, then deep fried. The panko gives it that ultra-crispy texture. I will say it's greasy as heck, but I wouldn't have expected anything different. John offered a side of ranch dressing here that I didn't use. 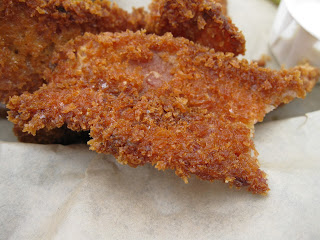 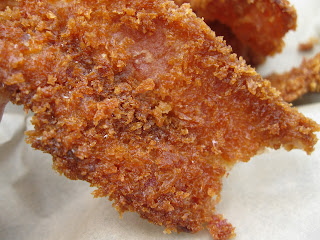 So basically, my heart hates me after I intentionally sabotaged my body with a zillion grams of saturated fat. Eating bacon still makes everything better. I'm sure when I eventually leave this Earth, there will be a lot of bacon at my funeral. And spicy food.

If you order a burger, it also comes with a package of Tim's potato chips. Naturally, I'd get jalapeno chips unless there was some spicier option. 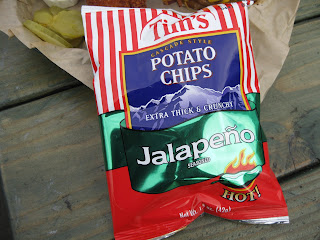 There is a "Hottie" burger as well ($7), which jalapenos, grilled onions and peppers, pepperjack cheese, and spicy cream cheese. I read on Food Carts Portland that regular pub buns here come from Portland French Bakery. Yeah, I passed on a "spicy" burger, but I figure it's mild for me anyway.

I have no idea what "Unicorn Bawls" are, but they are $4.

I see a Kids' Menu with a Lil' Burger, Grilled Cheese, or a PB&J sandwich. I say add some peanut butter to my bacon burgers and I'll be a giddy panda. Check out The Angry Unicorn ASAP! 8/10
Posted by Aaron at 11:00 PM