My poutine travels took me back to Mac! on Valentine's Day 2013. After all, I've developed quite an affection for the comfort food dish. But here, I had a take on poutine I never had before. 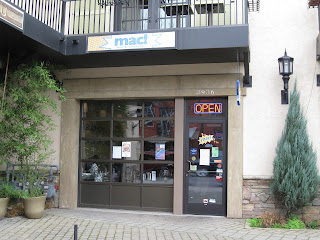 I walked in and found the place to be on the dim side. While the lunch boxes are still on the wall (which I noted on my October 2011 post), there have been several new additions to the regular menu. There is also a separate Sunday brunch menu from 10 a.m. to 3 p.m.

As people probably have seen from some of my other posts, I'm a huge fan of the fries-gravy-cheese curds combo known as poutine. And yes, Mac sells such a dish as an $8 starter, including beef gravy and using fried cheese curds instead of regular curds. Fried cheese curds can also be purchased separately for $5, some marinara sauce on the side. 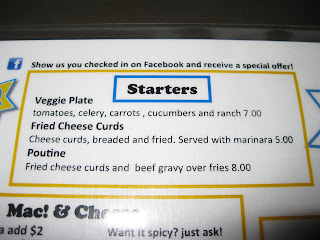 I've had my eyes for a while on the "Poutine Mac" ($9), which basically calls for macaroni instead of fries. A hearty helping arrives in a rounded ceramic dish with a handle. 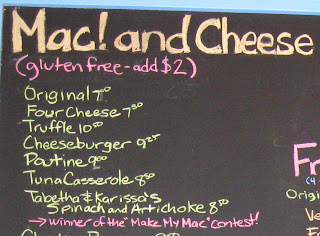 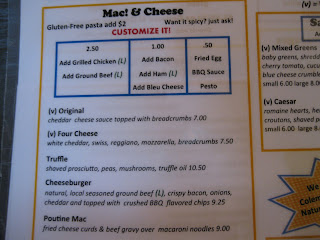 Since this place also allows you to make any mac spicy, you know I had to take that option. I inquired on what's added to make the dish spicy. Sriracha is the main component, and here, it's incorporated into the beef gravy. Double win. 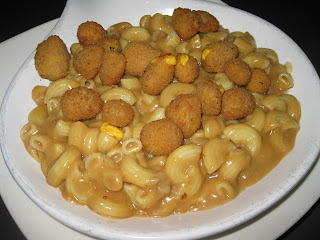 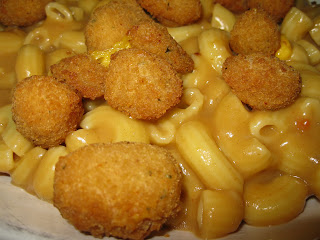 I thought the gravy was excellent, and I encourage fellow spicy-food lovers to take that spicy option. Even though I can handle some ridiculous pain, I still felt the pleasing spicy kick here.

The macaroni was perfectly cooked to my liking, just past al dente. I've actually never had fried cheese curds prior to this experience, and now I want more. I believe one of the workers said it was a Fred's brand, which I've never personally heard of. It's an orange-colored cheese curd here, breaded and fried.

At the time of my visit, there were maybe 6-7 other customers. I received my meal pretty quickly, considering that each mac is constructed to order. A set amount of macaroni is probably already cooked before opening, just to speed up the process that much more on orders.

There are a number of macs on the menu that sound amazing. The "Truffle Mac" ($10.50) includes shaved prosciutto and truffle oil. The "Greek" ($8.50) has sundried tomoatoes, kalamata olives, artichoke hearts, and feta cheese. Many of my friends will love the "Pulled Pork Mac" ($9.50; slow-roasted pulled pork, caramelized onions, and BBQ sauce). And then there's the winner of the "Make My Mac" contest, the "Spinach and Artichoke" mac ($8.50; chopped spinach and artichoke with garlic and Swiss cheese).

If that's not enough, you can make any mac a BURRITO for 50 cents more. There are gluten-free and vegan options. Customize any mac with grilled chicken or ground beef (add $2.50); bacon, ham, or bleu cheese (add $1); or fried egg, BBQ sauce, or pesto (add 50 cents). 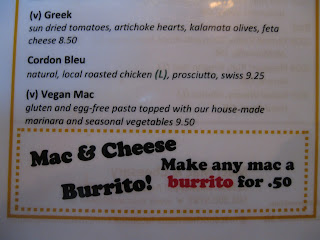 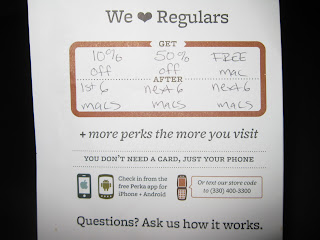 The aforementioned Sunday brunch menu (located on the company website) includes a breakfast burrito, buttermilk pancakes, and several omelet options. I hope to head back and try one of those items.

Check out Mac! Mac and Cheesery. The spicy mac option alone would keep me coming back. But to see they have poutine, fried cheese curds, and a separate brunch menu? Damn. I'm chalking this place up as a must-stop. 9/10
Posted by Aaron at 11:00 PM