(UPDATE 10/22/13: As of October 1, Rescue Bagels had closed both downtown locations while the owner finds a new production facility.)

Rescue Bagels has two locations in downtown Portland, Oregon. The original bagel cart is located near SW 6th and Columbia, while the second cart opened on March 4 at the Cool Harry's Frozen Yogurt cart at the corner of SW 10th and Alder. Owner Kevin Lawler makes boiled bagels like the ones he ate when living in New York City.

There's a small collection of carts near SW 6th and Columbia, probably four or so. Food Carts Portland was one of the first sites that alerted me to this particular cart. Since I like to enjoy a great bagel every once in a while, I had to check it out.

Kevin opened the cart in mid-January 2013 and the raves started pouring in. Seven different bagel options here, from the plain to "everything." The latter is the most popular, not surprised there. FYI, it's about $14 for a dozen. The price varies on the seven different spreads (from butter to smoked salmon). I got an onion bagel with the salmon spread ($3.25). 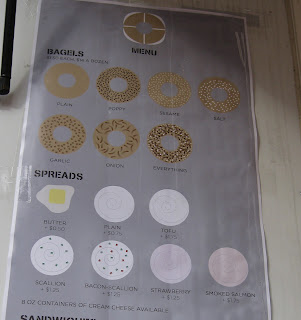 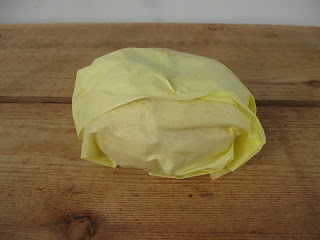 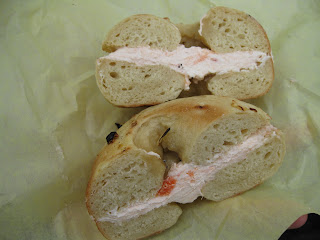 It's something about boiled-then-baked bagels that seems so comforting. Awesome chewiness with a slight crunch. The tiny air pockets tell me there's some density to the bagel, yet it stays light enough such that I don't feel entirely guilty about eating more than one.

For me, an ideal salmon spread-to-bagel ratio. The spread had a delicious smoked salmon flavor, awesome velvety texture from the cream cheese. If I didn't have to be elsewhere, I'd probably be the strange guy in a hoodie who just happens to be eating a dozen bagels on the sidewalk. Both the bagel and the spread had palate-pleasing flavor. 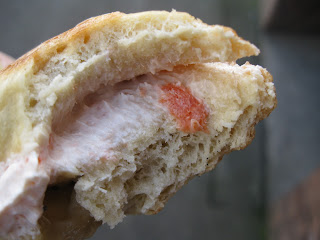 The bacon-scallion spread is another eye-grabbing option. Somehow, the smoked salmon just tugged at my wallet a bit harder because apparently this Asian needs more fish in his diet. Shocking, I know.

Breakfast sandwiches are anywhere from $4 to $5. Cheese options are cheddar and pepperjack, while meat options are bacon, sausage, and ham. The sausage, egg, and cheese sandwich is predictably one of the popular choices.

I never thought I'd be giving an elite stamp of approval on a bagel food cart. But dammit, these New York-style bagels are reasonably priced and overall flippin' awesome. And they make me do a happy panda dance in private. Even better that I don't have to travel roughly 3,000 miles now. 9/10
Posted by Aaron at 11:00 PM