(Also check out this great article from the Oregonian, published November 2012!)

Honkin' Huge Burritos is Portland's longest-running food cart, located in Pioneer Courthouse Square in downtown Portland, Oregon. Shelly Sorenson has been making these gargantuan burritos at the cart -- which is also known as Shelly's Garden -- for over 20 years. 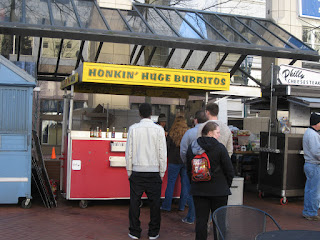 Burritos are one of my serious weaknesses. Making them honkin' huge just throws any remaining willpower out the window.

There are three different burrito sizes: small ($6.25), medium ($6.75), and honkin' ($7.25). One can also get a burrito salad, which also probably pleases the gluten-free crowd since giant flour tortillas are generally used. 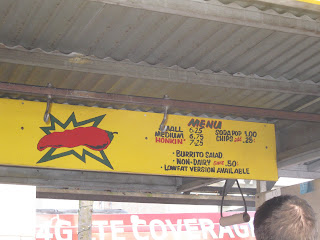 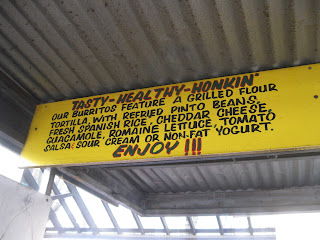 All burritos and "burrito salads" here are vegetarian, containing refried pinto beans, fresh Spanish rice, cheddar cheese, guacamole, romaine lettuce, tomato, salsa, and choice of sour cream or non-fat yogurt. I went with the Honkin' burrito (of course), but nixed the sour cream or yogurt option. Shelly really cooks that tortilla up, with dark toasted spots all over the tortilla. You can get hot sauce added to your burrito, and I chose the spiciest option, a habanero sauce.

For the record, the Honkin' burrito probably weighs close to two pounds. I attacked with a fork and knife while in public and in frigid temperatures. Inside my own cozy place, I'd save the utensils and be a messy panda. I really enjoyed the fresh vegetables and the hot sauce here. I felt the rice was a bit mushy for my liking, but I'd definitely eat this again. The habanero sauce added a bit of spice, very pleasing.

As I stood in line and even as I ate my burrito a few feet away, Shelly took orders from several longtime customers. She easily remembered the orders people generally get, including the size of the burrito, what goes in it, and any condiments that go on top. It certainly helps if she's heard the same order for a long time, but it gets more impressive as the list of regulars grows.

For the price, the Honkin' burrito is one heck of a deal. If you have a huge appetite and not a lot of money, this is the place to hit up. Pretty healthy stuff, especially when compared to many of the other items I've eaten over the years.

It's a cart with a large loyal following and does one thing very well. I'm sure this cart will be around for many more years to come. 8/10