Much like the Halloween Poutine Bender blog post I did late last year, I on occasion will have the occasional gyro craving. I've had the privilege of being able to try gyros at several different spots throughout the United States, mostly in the Pacific Northwest. 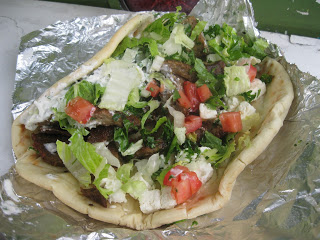 I've eaten quite a few gyros over the past year and a half. Instead of listing them all, I'll share ten of my personal favorite gyros to date (in alphabetical order).

A Taste of Greek really made me happy with their Super Lamb Gyro. Larger pita and more chunks of lamb meat than the "normal" gyro, plus feta cheese. The pita ultimately couldn't contain all the tasty goodness. All from a food cart near SW 2nd and Stark in downtown Portland.

Anoush Deli has a couple of brick-and-mortar spots in Portland and Vancouver, each fairly close to me. Gyros are about $6, and it's 50 cents more for feta. The quality is awesome, but they don't like it when you snap photos in their place. There was no "No photography" sign in there at the time, so frankly, I wasn't breaking any laws if I'm taking a photograph while lawfully in a place that's open to the public. You can tell I'm still miffed at the disrespect I got. This place is still on the list because I'm listing some of my favorite gyros.

Aybla Grill has three food carts in Portland, two of them downtown. Their regular lamb gyro has a bit of heft to it, the tasty meat cut in chunks. You can add feta to this, which I always try to do. The pita's toasted up just slightly, scoring bonus points. If you're real hungry, I suggest the super lamb gyro. Back then, I was still regularly taking pics with my crappy camera phone. Holy crap, time flies when you have so many places to try.

Egyptian Food Cart in downtown Portland (SW 9th and Alder) is the only gyro I've had so far where the cart owner asks if you want hot sauce added. It's made with sambal oelek, but it still counts. For $5.50, you'll get a decent-sized gyro. Thin strips of lamb in generous amounts. Mohammed (the cart owner) did a great job toasting the pita. Even though there was no feta, the hot sauce more than made up for it.

Istanbul Delight is one of several food carts that shutter during the winter months. When they are open, they got a pretty darn good gyro with thinly sliced meat, a lamb-beef hybrid. I'll remember next time to add feta for an extra 25 cents. As of April 2013, Istanbul Delight can be found at the A la Carts Food Pavilion on SE 50th and Division.

Mad Greek Deli may also be known for their Mad Greek sandwich and Greek fries, but I'm a huge fan of the Foti's lamb gyro. This place also cuts the lamb meat in thin strips. Adding feta will cost a little more, but again, it's well worth it. The pita used is the thicker version (my personal preference), not a thin tortilla-like wrapping.

NYC Pizzeria (Vancouver, WA) seems to get more rave reviews for the gyros than the pizza. The gyro I had here lived up to the hype. Juicy, well-seasoned meat, with fresh vegetables. I didn't see an option on the menu where you can add feta, but I know they carry it.

Ozzie's Deli & Gyros has been around for over 30 years, and for good reason. For $7.65, a huge gyro with thin strips of lamb, fresh vegetables, and feta cheese. A pepperoncini with my gyro is always a welcome sight. It makes me want to eat a whole jar of pepproncinis. Probably not normal, but eh, the gyro rules.

Ramy's Lamb Shack uses local meats and fresh, from-scratch sauces (tzatziki and tahini). The lamb gyro here is filled with juicy, delicious lamb meat and fresh vegetables. Feta is included. Ramy lightly toasts the flatbread on the grill and you have one amazing gyro. I really don't visit as much as I should. Bad panda. Oh, and get his baklava.

Yes, I make my stupid spicy videos, and I probably shouldn't be trusted in general when it comes to eating spicy food, but trust me on the baklava.

Getta Gyro is a place that just opened in December 2012. While it's an expansion of a small business specializing in baklava, the gyros are also top-notch. I usually get the gyro with everything in it, which includes feta and minced pepperoncinis.

All the gyros I've eaten in my life have had their positives. The ones listed above just left a few more great memories. I look forward to eating more awesome gyros in the years to come.

In the last week or so, I've stumbled upon even more places to try gyros. Many of them are within reasonable driving distance. A food blogger's work is never done, and I have no problems with that. Hopefully, I'll have time to check these places out.
Posted by Aaron at 12:00 AM