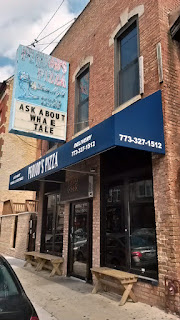 The original location appears to be the Morton Grove spot on Fernald Avenue, which dates back to 1970. The founder,  Burt Katz, sold Pequod's in 1986. The Lincoln Park spot (Chicago) opened in 1992. The Chicago location then had a fire in 2006, which closed the place for nearly five months.

As shown on Man v. Food's second Chicago episode (the season with Casey Webb), Pequod's is known for their take on deep dish pizza. Instead of having the crust rise up along the side of the pan, they put a layer of mozzarella cheese that hugs the side of the pan, giving it a unique, dark golden-brown cheesy experience. Caramelized crust, as some people say.

Pequod's opened around 11 AM on a Sunday. Even at close to peak lunch hour, I grabbed at seat at the bar again with no wait time.

Luckily again for me, Pequod's serves up personal-size pies in addition to larger options. Each topping costs extra, so I went with the usual personal-size cheese deep-dish pizza with giardiniera on top. 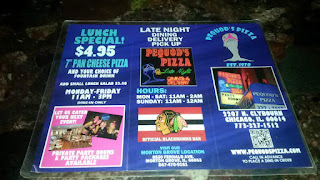 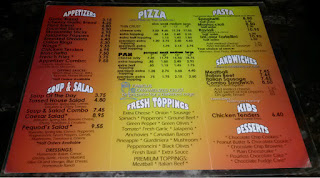 Giardiniera is an Italian relish of pickled veggies that can have a little spice to them depending on what is used, and is quite popular around Chicago. It can be a mix of veggies or one type of vegetable; it can be on the milder side or very spicy.

The pizza here was probably around 6 to 7 inches in diameter, complete with the dark golden-brown cheese on the rim. I've never had giardiniera on a pizza, and I really enjoyed the pickled veggies here. Mild heat. 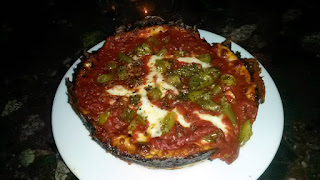 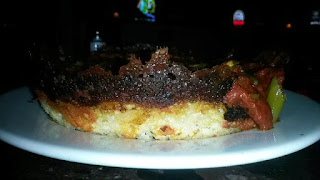 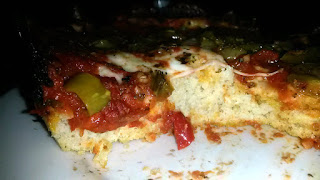 A few comparisons or contrasts from Lou Malnati's (other than the cheesy side):
It also took far less time, maybe around the 25-minute mark, to get my pizza here. Apparently, it's a lot wiser to call in your order beforehand (if the place allows it) and then arrive, be seated, and not need to wait as long.

Great service at Pequod's. I could have gotten a beer here too, but I opted to quench my thirst at a brewery instead.

Still, for another amazing deep-dish pizza, head to Pequod's. I hope to eventually go to the original Morton Grove spot one day. 9/10
Posted by Aaron at 11:00 PM

Email ThisBlogThis!Share to TwitterShare to FacebookShare to Pinterest
Labels: Illinois, The Elite (9+ Rating)