Omy's Cafe (pronounced "oh-my's") is located on NE Fourth Plain Road in Vancouver, Washington. When scoping out my new surroundings, I like to find some breakfast places that serve gigantic portions. After doing a bit of research, I found Omy's fits that bill perfectly. I just had to stop in and try the food. 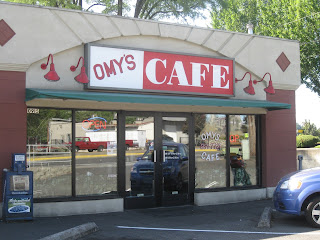 Omy's has been around for a while, and the decor confirms it. It has an outdated diner and dive-like feel. Even a few of the seats need reupholstering. For my first visit, I dropped in a bit past 10 on a weekday, so it wasn't very crowded. One woman worked the front of the house, while I noticed another person cooking in the back. 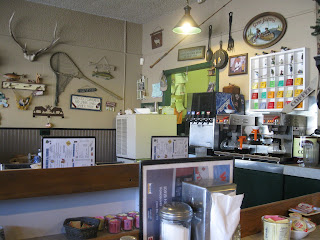 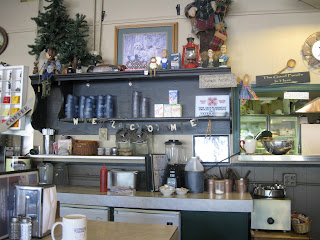 Omy's serves breakfast and lunch all day. Omelets could have three eggs or six. A couple raved on how big a half-order of the biscuits and gravy ($6.25) was. It's to the point where there's even a QUARTER order of the B&G on the menu ($4.50). Don't see that all the time. 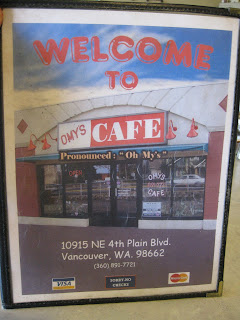 My eyes turned next to the "Omy's Platter": bacon, ham, sausage, green pepper, onions, and tomatoes mixed with crispy hashbrowns and cheese, all smothered in country gravy and topped with two eggs any style. The description alone is a damn mouthful. Then my server told me the HALF order ($9.75) feeds two people. Woohoo! So what about the full order ($11.75)? It apparently comes out on a huge oval platter. At least I'd have enough to last the week.

Not wanting to slip into the dangerous food coma on the drive home, I opted for the three-egg Denver omelet ($8.75), with hashbrowns and two pieces of buttered toast. 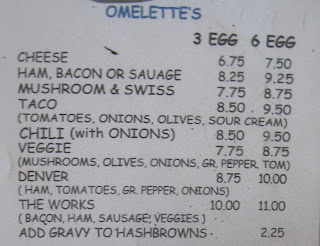 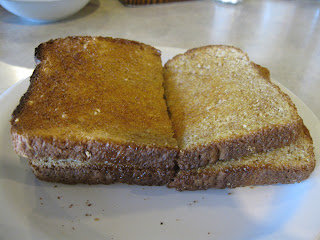 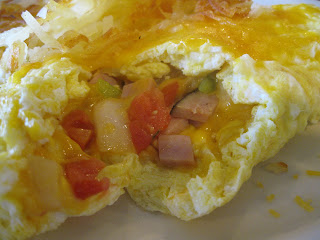 This one had its ups and downs. The hashbrowns were cooked nicely -- golden brown on the outside -- but needed more seasoning. Just adding simple salt and pepper would work. Meanwhile, the omelet was OK, but again needed a bit more seasoning. Also, while I got a bunch of bell pepper, tomato, and onion, I found myself wanting more ham to balance everything out. On the plus side, the omelet was nice and fluffy, easily holding the filling inside.

Despite the mixed reviews, for the amount of food I got here, it still may become one of my go-to spots in Vancouver for a filling bargain breakfast. Very good service. I'll be coming back to try this place again.

Maybe next time, I'll get a full Omy's Platter, take a photo of it, and tease my friends with its sheer size. I'll then proceed that much closer to an early death. Mmm...bacon and country gravy. 6/10
Posted by Aaron at 11:30 PM