Crepes Plus is located at the Cartlandia food pod (SE 82nd and Harney) in Portland, Oregon. The cart opened at Cartlandia around the beginning of August. At the end of that month, I decided to go and check it out. Alex was the man running the cart on the day I arrived. 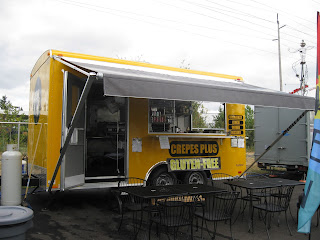 There is a nice lineup of savory and sweet crepes, probably 6-7 of each type. There are also occasional specials. For the gluten-free population, Alex does offer gluten-free crepes that use rice flour, but be warned that it's still not the place to go if you really have a sensitive and potentially fatal gluten reaction (cross-contamination issues). Crepes Plus even explicitly states so at one of the notices on the cart. I'm not sure if this cart even has a separate crepe griddle for such gluten-free meals. 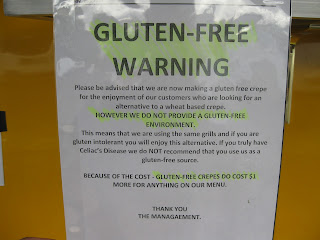 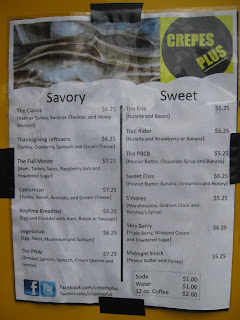 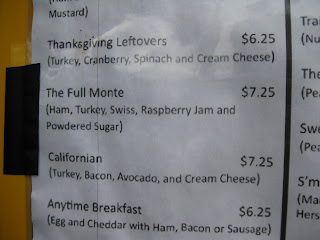 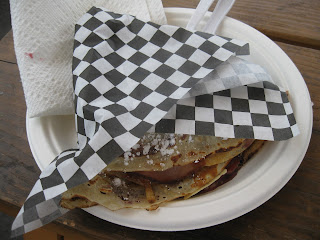 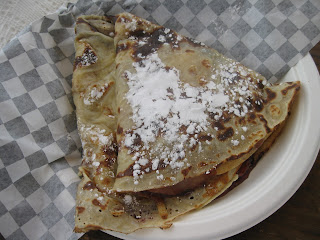 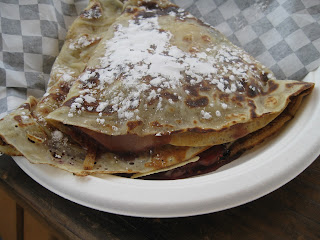 I have nice praise for this cart. Everything was executed well. First, real ham and turkey used -- and they didn't skimp on my portion. It's one thing to use cold cut deli meat, but there's nothing like the real stuff. It's one heck of an ideal sweet-savory mix here, so if you like such combinations and haven't had one of these, I'd give it a go. But second, the crepe was just awesome to cut into. All the components were layered nicely, allowing for a great cross-section photo.

Alex told me the Californian savory crepe (turkey, bacon, avocado, cream cheese) is among the most popular, and if you like sweet crepes, you can't go wrong with Nutella. And they have a crepe with Nutella and bacon. Foodgasm time. Oh, and for those that aren't as high up on chocolate, the "Very Berry" is also recommended.

The Mexi-Crepe was also a weekly special item a couple weeks back (seasoned hamburger, onions, tomatoes, cheddar, sour cream, and salsa). I've heard it's been very successful and apparently will become a regular menu item.

Cartlandia has expanded enough such that the back fence (near where the Brothers Express Mexican cart and Relish currently park) has opened up to allow more carts. Crepes Plus is in that back lot, along with newcomers Stoked BBQ and Eclectic Eatery (which moved from its Sellwood spot).

Roger, the man owning the Cartlandia lot, is making a huge statement by getting more great carts to join the pod. Be sure to head to this pod, try out Crepes Plus and the other 20-some carts there. Don't mind the food coma. I hear it's a great feeling.
Posted by Aaron at 11:00 PM