Philly's Best has a couple of food cart locations in Portland, Oregon. They used to have one downtown near Portland State University, but it has reportedly moved. The last I checked, they had locations on MLK Jr. Blvd and at the pod right by N Mississippi and Fremont. They also may be at Last Thursdays on NE Alberta at the end of the month, which is where I found the crew this time. 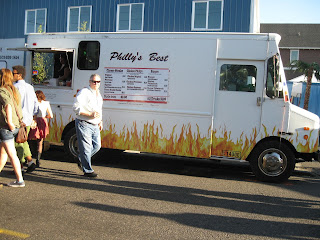 The panda treated himself to a gluttonfest at Last Thursday a few weeks back (an end-of-the-month celebration on NE Alberta with food/art vendors and entertainment). One of the guys working the cart remembered me from when I did those Insane Heat wings at Grass Roots Cafe. As a note, I learned Grass Roots Cafe now does mostly catering events.

I opted for the supreme cheesesteak here ($7), getting a nice helping of chopped, thinly sliced beef peppers, onions, and, by special request, a double handful of jalapenos -- really because they don't have much more spice in the cart. Sure, they got sriracha, but that's one of those things I'd start taking random shots of. For cheese, I went with provolone this time. 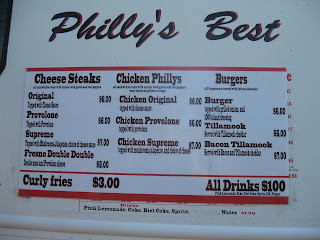 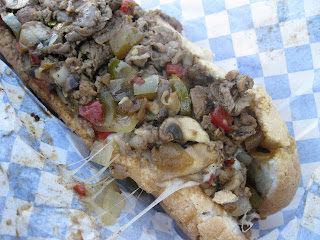 It's a well-executed cheesesteak that really has almost all the components I seek in a good sandwich. I can't help but borrow Adam Richman's "BITE" scale from his "Best Sandwich in America" series.

The bread is soft and lightly toasted up, so it's able to hold everything in without making too much of a mess. High marks there. Other cheesesteak spots in Portland use Amoroso rolls, which appears to be the dominant choice in Philadelphia. While the bread at Philly's Best looked different at first glance, it's still a very nice, high-quality selection.

The interior and taste are awesome. You can't go wrong with a cheesesteak option at Philly's Best. Beef's juicy. Peppers, onions, mushrooms, and jalapenos add wonderful flavor, all cooked perfectly. Cheese is melted and stringy, the ideal glue.

Experience-wise, it's a great cheesesteak from a yet another great Portland food cart. Many brick-and-mortar spots around the country wouldn't be able to pull off what Philly's Best does -- nor would those people put nearly as much passion into their food.

The Fresno Double Double ($10) is basically double portions of meat and cheese. It's something I could easily put away, but I wanted to save room and try some other vendors at Last Thursday. I'll have to try the chicken options in the future as well.

While I held back and only went to a handful of places, this was the best thing I ate at Last Thursday. Find Philly's Best and give 'em a try. 8.5/10
Posted by Aaron at 12:00 AM