(UPDATE 10/3/12) There is also a second location on NE 122nd Ave. in Portland, Oregon. I have added pictures from that spot near the bottom of the post.

I stopped by in mid-September, wanting to get out and explore the town. The place has a vintage feel. As you walk in, immediately on your left is the deli counter. The display cases feature tons of European sausages and other sliced meats. There are many packaged or boxed sweet treats scattered throughout the market, so if you're the curious person with the sweet tooth, your wallet just may get a bit emptier here. 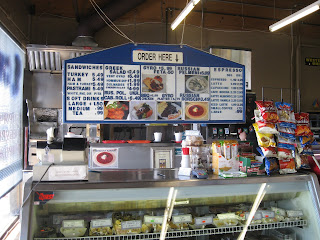 The deli itself mainly has Greek and Russian dishes. Front and center are the Greek gyros ($5.99), and it's 50 cents more to add feta. I opted for that this time. 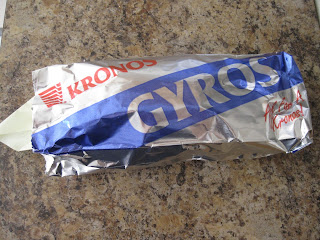 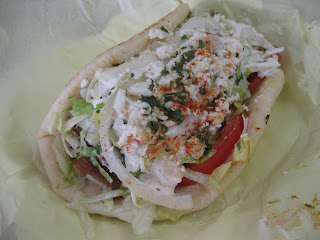 It's a delicious gyro with generous amounts of sliced meat. I failed to ask what type of meat, but I'd guess it was a lamb-beef combo like at many other places. Much of it was juicy, but some slices were a bit on the dry side. Spot-on with the seasoning. I personally prefer a thick pita used here over other Mediterranean places that use a thinner wrap for their gyros.

The vegetables were all fresh and crunchy (shredded lettuce, sliced tomatoes, olives, onions, and Greek peppers). The tzatziki sauce was wonderful. I think that was a bit of paprika on top, and that also gave beautiful color. It looks like they use Kronos, a quality supplier to make gyros.

The display case underneath the ordering counter has more European desserts, including baklava.

The Portland spot is basically the same as the Fourth Plain spot. From what I saw, it looks like they have a slightly larger meat selection at the Vancouver location. The deli counter here is on the right as you walk in. 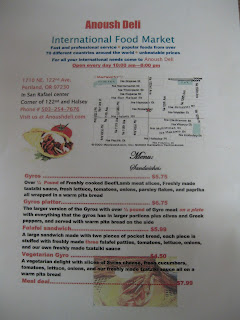 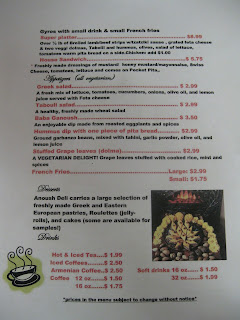 The gyro I received here was slightly cheaper ($5.75, plus 75 cents to add feta) since you don't pay sales tax in Oregon. I found the meat here to be slightly better. A quarter pound of moist, flavorful lamb/beef strips. I didn't detect any onions, olives, or Greek peppers here, just a large helping of shredded lettuce and sliced tomato. 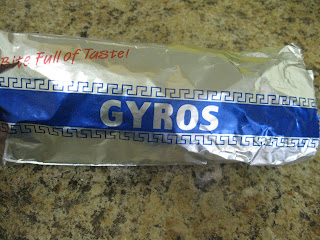 The gyro platter ($6.75) has a half-pound of meat and is more my type of portion. But wait! There's a super platter option ($9.99) as well that includes dolmas,  tabouli, and hummus! Woohoo!

It was tantalizing to see a lovely array of fresh desserts, but I miraculously held off on that. Like on Fourth Plain Road, this spot also has borscht and pelmeni.
___________________

A useful tip if you head here and like to take pictures of food: get permission first. One person (who I will assume was the owner) mentioned that there was an incident a while back that forced them to crack down on people who took pictures without permission. Understandably, he didn't want to talk about it further.

I wish I knew that beforehand. As I snapped a photo of the display case of food, one of the young guys behind the counter (who may or may not have been the owner's son) snapped and demanded that I erase that photo. This startled me, as I never before had a worker snap at me in such a manner. He kept saying taking photos was against the law, which I highly doubt is true. It may be against this store's rules and regulations, but not the law. Even then, I saw no sign telling me not to take photos.

Note to businesses: you should presume your customers have no idea what the store rules are and should clearly say something is not to be done -- unless, for example, it's clearly a crime to a reasonable person, such as shoplifting. Sorry, but in my opinion, taking photos in a store is by itself NOT against the law. Even a person's clothing or mannerisms should not necessarily matter. (****This should NOT be taken as actual legal advice****)

I assured him it was erased, then got out from behind the counter and briskly walked right up to me, wanting to make sure it was gone. He accused me of lying to him that it was even erased (I did erase the photo in question). The owner came out and quickly calmed things down so I could tell him it was just for food blogging purposes. Cooler heads prevailed, and the young man and I both apologized to one another for our actions. While I appreciate the owner's swift action, he needs to tell his young employee that it's almost always wrong to raise his voice at a customer, and the young man's actions in this case were far from warranted. I fear that, if it were not for the owner, things could have spiraled way out of control.

I won't hold this incident against them. I won't lie; I probably would have held some type of grudge in the past. I know better now, and I don't want the reader to forget about the delicious gyro I received. Check this place out, although I'll be very cautious the next time I head back. 8/10
Posted by Aaron at 11:00 PM