I usually don't head out much for dinner, especially on a Friday or Saturday night, mainly because I know how crowded places get. In a nutshell, it's smart to book a reservation if there is such an option.

Din Tai Fung was bustling when we got there just before 6 p.m. Luckily, we had a reservation for around 6:30. In the meantime, all the people waiting can watch the employees making the dim sum on the other side of the glass window. 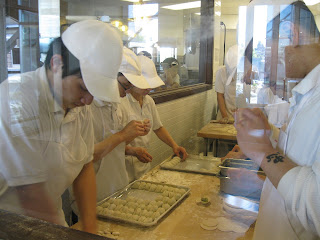 Yeah, parking might be an issue here, but if you can find a spot in one of the nearby parking lots at the traditionally busy times, more power to you. 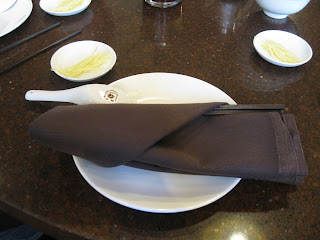 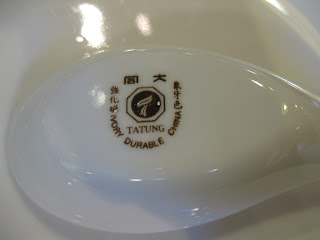 There are a ton of amazing choices on the menu, and I got a chance to try several items. 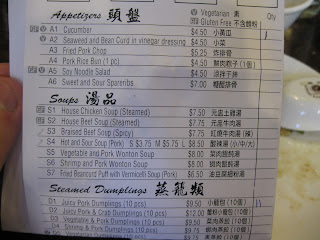 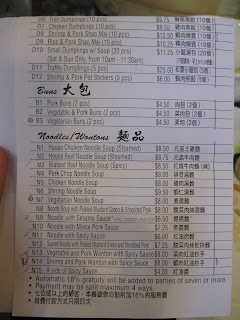 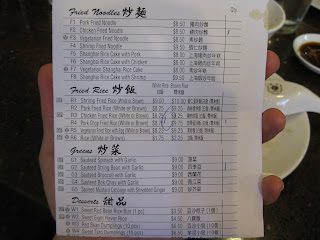 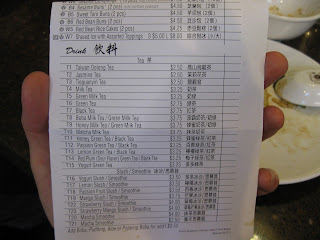 The cucumber appetizer actually arrived last because they forgot about it, but it was quite tasty. A chilled dish that probably got a bit of sesame oil and chile oil (something like that). Great stuff. 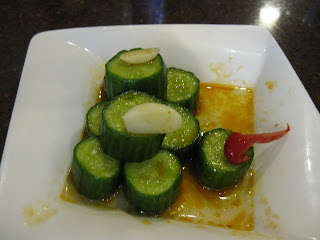 The Juicy Pork Dumplings ($9.50 for 10) are not like any dumpling I've had in the past. A small well of pork broth is hidden inside the dumpling, so you'll really get hit with a burst of hot broth when biting in. The broth is well controlled on flavor, not too salty and extremely addicting. I'm sure all of us wanted at least a couple orders (20 dumplings) just for ourselves.

Huge thumbs up for the Shrimp and Pork Wontons in Spicy Sauce ($8). No, it wasn't spicy for me. Yes, it was flavorful and delicious. The wonton itself had that ideal chewy nature to it, not overcooked and not underdone. 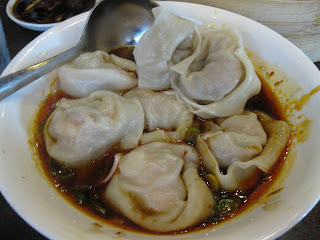 Next up, some Pork Chop Fried Rice ($8.75 with white rice). Awesome breading on the pork chops and cooked to a solid golden brown. The rice brought some slight flavor of its own but still allowed the pork chops to have the spotlight.

The Shrimp and Pork Shao Mai ($12.50) also contained the pleasing pork broth surprise at the bottom. The shrimp on the top made this one look like some specimen you'd find underwater on a Spongebob Squarepants cartoon. But damn was this delicious. Juicy shrimp, juicy pork, double win.

The Chicken Fried Noodles ($8.50) were so good, we ordered a second round of it. Absolutely perfect al dente noodles, thick and chewy. Some of the best stir-fried vegetables I've had.

Something as simple as Sauteed Green Beans in Garlic might help convert the pickiest of eaters. The buttery, garlicky nature to this one is so simple, yet so effective. The green beans stayed crunchy and held its vibrant color.

The dessert was Sesame Dumplings. The inside is jet black, and the sesame is more of a granular texture. The sweetness is controlled well and the dough was perfect as usual.

We racked up a hefty bill, but that was predictable since there were seven of us.

Brave the wait (or heck man, just book a reservation) and find some parking. Din Tai Fung is definitely worth the trip. I can't thank my friends enough for inviting me. 9/10
Posted by Aaron at 11:00 PM