For the past three years from mid-April to mid-May, Legendary Doughnuts holds a glazed doughnut challenge. In order to enter, you must sign up and let someone at the place know at least a day in advance. 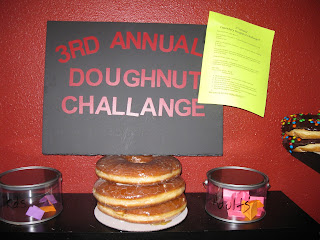 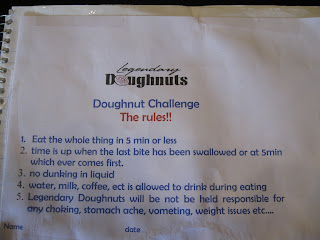 I called the place several days prior to reserve my spot, and when I arrived on the morning of May 4, the doughnut was basically ready for me. 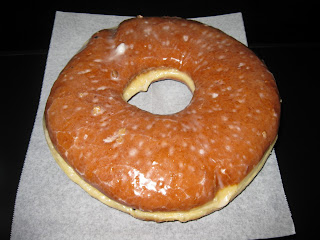 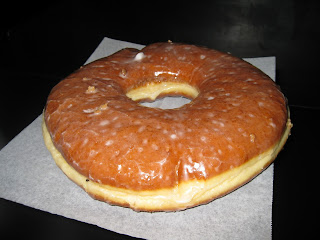 The challenge admittedly was harder than I expected, and it really came down to the wire. One of the employees keeps time and lets you know when each minute has gone by. Around the 2-minute mark, I still had a good half of the doughnut to go. Four minutes in (one minute remaining), I probably had a quarter of the doughnut left. I forced it down as quickly as possible and finished with seconds to spare.

Here's video of the challenge! It should give you a better idea of how big that doughnut was:


I was credited with a time of 4:42, although the video puts my win somewhere around the 4:50 mark. Either way, it's still a win.

The doughnut had a crusty exterior (not including the hardened sugar glaze coating). The interior was relatively soft but a bit dry. To be fair, it might be harder to keep a huge doughnut soft and fluffy.

I'm not sure how long the 1-pound beast had been sitting out; I didn't have to wait at all for my doughnut.

This was a fun challenge and I'll try to participate again next year! 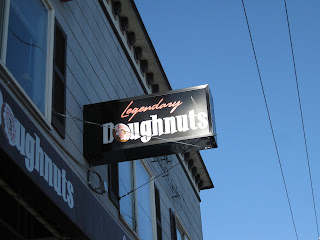 NOTE: The Tiger Tail doughnuts here are ridiculously huge. I'll have to get one next time and blog about it.
Posted by Aaron at 11:00 PM