(UPDATE 7/7/14: Some good news to report for food cart lovers! It appears that the Good Food Here pod will NOT be closing after all.)

Food Carts Portland reported earlier this month that four Portland food pods would be closing by the end of Summer 2014, leaving some 25 food carts scrambling to find a new home.

The Cartopia pod has been around for about six years and helped the Portland food cart scene reach never-before-seen heights. Finally, Portland had a food pod devoted to late-night grub (see Potato Champion and Whiffies as prime examples). Other carts like Pyro Pizza, Perierra Creperie, and PBJ's Grilled have carts there as well. All cart owners have eagerly joined in to feed the late-night masses. 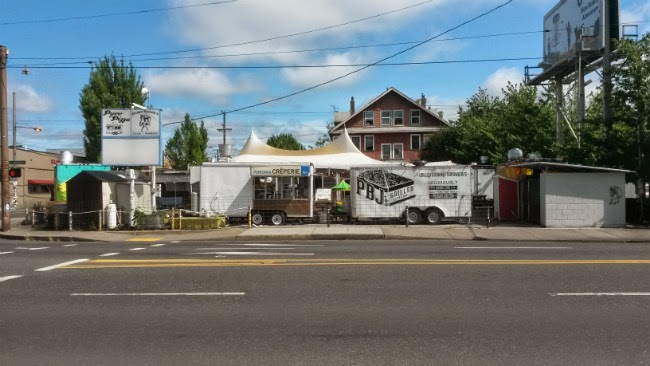 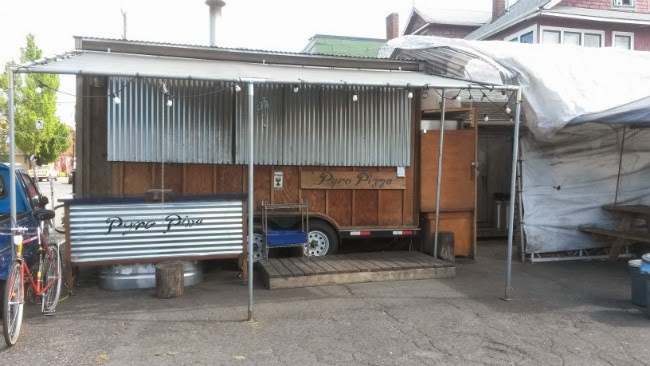 As Gregg of Whiffies said (and I totally agree): "The problem is that our success is now our downfall." The increased property values have seemingly made it impossible for food pods to stay. Lot owners likely see more value in building retail shops and apartment complexes.

To me, turning this pod being into an apartment complex is not the wisest move. Where would the new tenants park? The people already living in the area occupy 90% of the street parking spots. The others heading to Cartopia fight to get the remaining spots -- or perhaps they'd head to Lardo across the street. Unless this apartment complex comes with some underground parking (probably zero chance of that, because the plans already call for retail shops on the ground floor and no added parking), the Portland community loses a huge part of its food cart pod history and becomes even more of a war zone for parking. Maybe people will have to park 5-10 blocks away now just to get somewhere on Hawthorne.
______________________

Until I drove here to snap photos for this blog post, I admit that I hadn't been to the North Station pod since last year, when one of The Great Food Truck Race contestants set up shop there when filming Season 4. Not many more carts have graced the area. When I got there, I saw four carts total, plus Handsome Pizza (a nice pizza place that sells Scoop ice cream). No one was open on Sunday for lunch. 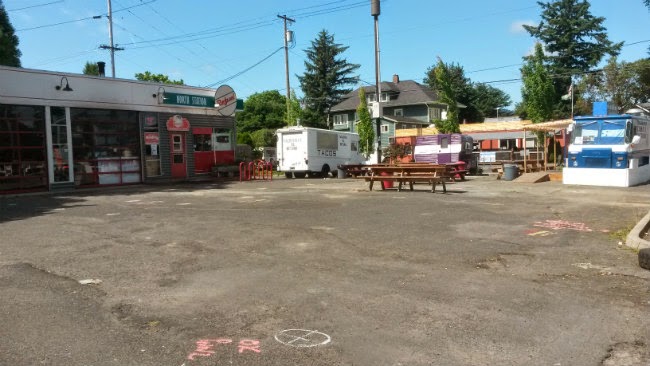 According to The Oregonian, there will be 25 condos -- and no parking -- replacing the North Station pod. The pod may be no more by 2015.

The Good Food Here pod has been a mainstay for many Portland food carts over the years. Currently, food carts like Blues City Biscuits, Fishbox, Timbers Doghouse PDX, and Herb's Mac and Cheese are found there.

I enjoyed this pod because finding parking has never been an issue. I'd park a block or two away in the residential area (like many others would) and walk across the street to the pod. 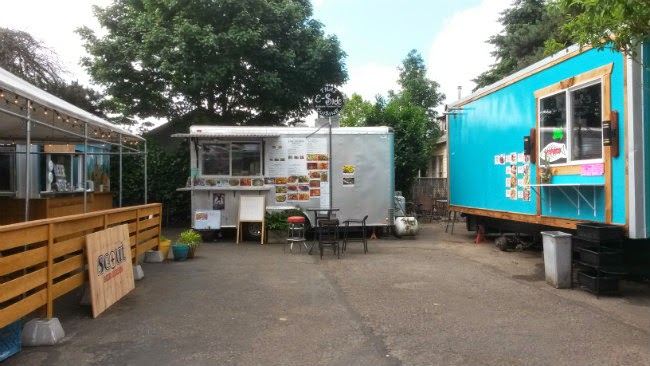 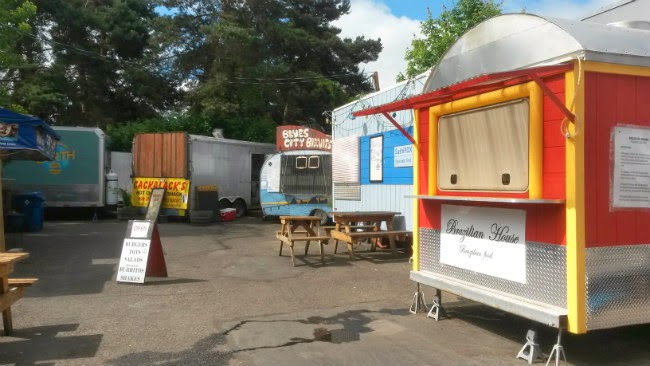 In early June 2014, I learned that the downtown food pod at SW 6th and Columbia would also be shutting down at the end of the month, forcing the owners of seven food carts to find a new home.

KATU (in Portland) broke the story on June 3. The Oregonian followed with an article on June 4.

I've been to one of Aybla Grill's other spots (Good Food Here), but Love Beliezan is another cart there that I've been wanting to try for the longest time. 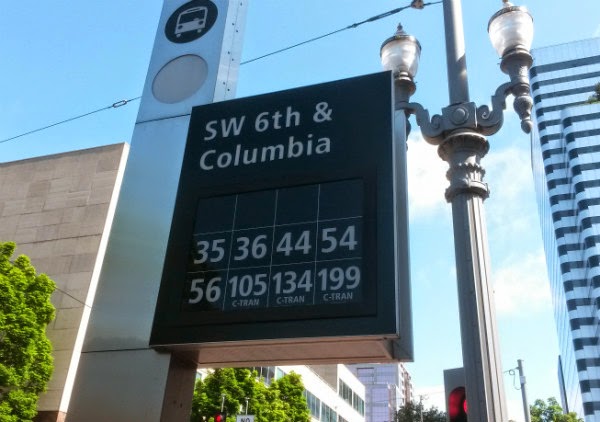 While this may simply look like another commercial landlord-tenant contractual matter to some people, the matter gets deeply troubling because food cart pods have been a part of Portland's culture for years. Also, the cart owners at this particular pod received shorter notice time (30 days) to leave.
______________________

Seeing four Portland food pods close is deeply disturbing, especially because it is during the time of year when food cart owners expect their highest sales/revenue.

It is also worth mentioning that Dreamers Marketplace on NE MLK Blvd in Portland -- once home to the popular food cart Pepper Box -- also stopped operating as a food pod last October to make way for new developments. As of June 2014, Jim has yet to find a new place to place his popular food cart. At this time, I am unsure whether they will re-open. Jim's last Facebook update on March 11 mentioned "reaching for bigger and better things in a more permanent space."

Unfortunately, we live in a material world; money talks. Food cart owners are running their small businesses in hopes of becoming Portland's next success story. I fell in love with Portland a few years back because the city embraced giving small business owners a shot. There were many areas for food cart owners to set up shop.

Fast forward a couple years. The economy still isn't fully cooperating, and more people want to start their respective food cart endeavors -- whether it was being unhappy at their previous job, getting laid off from their previous job, or to chase a personal dream.

Food pod owners still get a zillion applications, but only 1-2 spots are available. Despite having new pods open up over the past couple of years (Rose City Food Park, Central Eastside, 32nd and Hawthorne, etc.), others have closed (Green Castle, D-Street Noshery, Dreamers Marketplace).

With some 25+ carts seeking new spots, existing vacancies become even more treasured. I recall Roger Goldingay (who runs the Mississippi Marketplace and Cartlandia pods) telling Steven Shomler that he would get a ton of applications from food cart owners -- all vying for a couple of openings. It must pain a food pod owner to turn away applicants or relay any bad news.

Perhaps food cart owners will look to other cities/towns in hopes of starting a food pod there. Perhaps Hillsboro, Beaverton, Gresham, or Bend? I do not know what the city ordinances are like there, but hopefully there is an alternative.

Otherwise, at this rate, more food carts may look to mobile trucks to keep their food cart business dream alive. Retrolicious abandoned the food pod idea a while ago, joining a rotating list of trucks at the Kaiser building on Multnomah. Retrolicious and other food cart owners have also heavily pushed catering events or other large events (i.e. food cart festivals) to keep the business going.

Many thought gourmet food carts would be a short-lived fad. In Portland, the food cart phenomenon is as strong as ever.

With the new pod closures and upcoming plans for those lots, Portland's increased urbanization has clashed with the food cart boom. Can the city contain competing parking needs? Can the city remain an encouraging place to start a small food cart business? At this time, neither appears likely.

Portland, I honestly do not need to see more apartments or condos in the area. I moved closer to the area because I love the food carts. I enjoy the Saturday Markets, the numerous street fairs, and all other functions that have made Portland a cool place to be. Every now and then, we'll have the person in a Darth Vader mask riding a unicycle, wearing a kilt, and playing the flaming bagpipes.

City of Portland, it's your move. Help my food cart brothers and sisters out.
Posted by Aaron at 11:00 PM