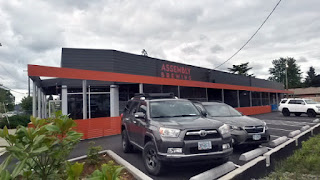 Assembly Brewing opened about four months ago on March 23. It was one of 2019's Most Anticipated New Breweries in Oregon.

I love the murals on the wall. It's also a very spacious place with a bunch of booths and tables. 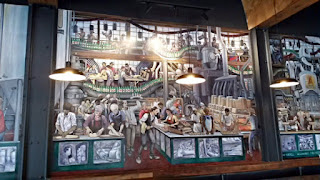 I sampled Assembly's Live-PA and regular IPA first. The Live-PA (6.2%) is clear golden, with well-balanced malt and grapefruit qualities, while the IPA (5.9%) is a balanced hazier-golden brew but a bit more faint on the tropical. 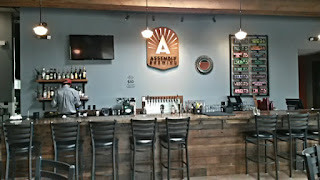 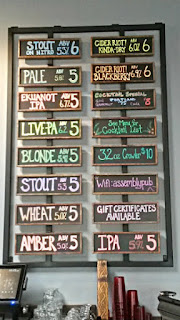 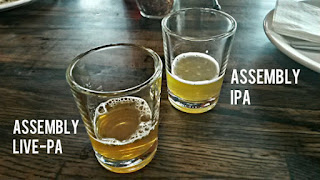 I ended up with a half-pour (8 oz) of the Eukanot IPA. At 6.7%, it's another hazy-golden IPA with more assertive grapefruit and complementing malt. 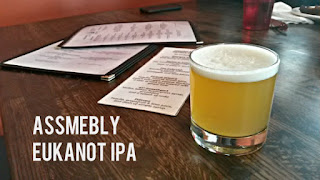 All beers were refreshing. Admittedly, none of them will smack you in the face and make you go "wow", but they do the trick and pair well with the food. 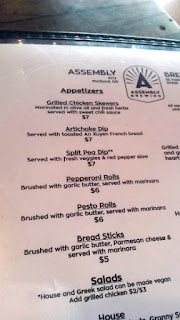 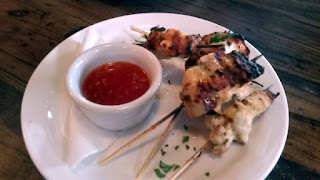 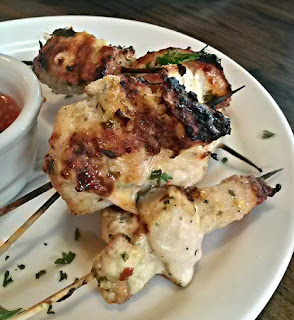 Co-owner George Johnson also has Detroit roots, so it's only fitting that Detroit-style pizza be on the menu.

Detroit-style pizza is a square pie thicker than a typical thin-crust and generally baked in an oiled pan. Baking in the pan also allow the edges to get that extra crunchy, dark-brown texture. All pies are made to order. 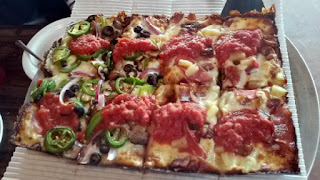 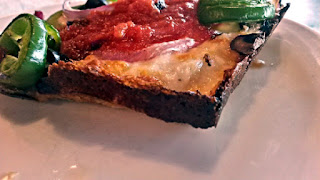 I usually shake my head at any place that serves Hawaiian pizza. Yes, I will eat pineapple on pizza, but it's more that I'm from Hawaii, and we are known for more than pineapple. Unfortunately, pineapple is also cheaper and easier to put on pizza than, say, kalua pig or lomi salmon.

Anyway, off the mini-rant. The Hawaiian pizza was very good here. Using pork roll instead of generic ham took this pizza to the next level. 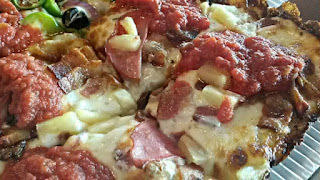 Even the Veggie pizza kicked ass. Green peppers, red onions, mushrooms, and black olives made it very colorful and attractive. Great crunch from the veggies. 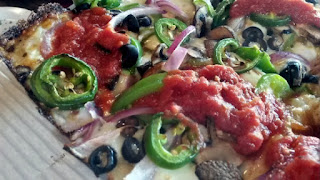 I didn't think the pizza here was too thick on crust, and in fact was right around the proper ratio if I wanted a more substantial pie to share with friends. A good helping of toppings. It appears that the cheese goes on the dough first, then the sauce on top. The dollops of sweet tomato marinara on top invited me and my friends to combine it with the rest of the toppings before stuffing our faces.

Adding jalapenos is the way to go. Baked jalapenos will take a good portion of the spice away but leave wonderful flavor and mild heat.

We finished our meal with a Caesar salad. House-made dressing perfectly mixed in. Hand-torn croutons were crunchy, and blissful shavings of Parmesan cheese. 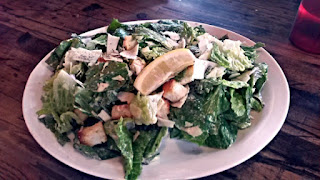 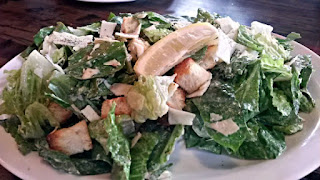 There are a few parking spaces in an adjacent lot, but beware that it's a narrow alley to back out of your stall. There is free street parking also nearby. 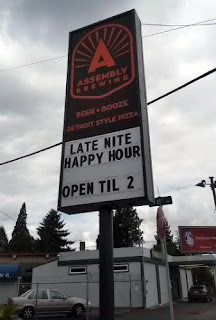