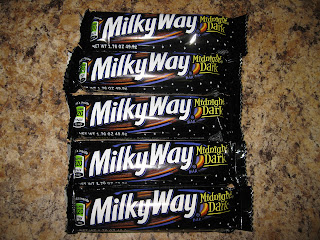 Naader Reda pitched the original Midnight Madness idea to me, intending for just the two of us to do some type of New Year's video collaboration. However, we wanted to get more people involved, and I'm glad we went that route. Even though it may have been very short notice for others, it made for some interesting video submissions.

Big thanks to the Big Eaters Club for creating a page with everyone's videos. It's great to have one spot to view them all! Check out their page and see the madness for yourself! And special thanks to Eatfeats for also posting links to our videos! All the videos were great, but here were some of my personal favorites:

Naader's video was entertaining and, well, disturbing (in a good way). Just remember that he's a history teacher, then go watch the video.

Chuck from the Bronx also went with the spicy twist and added some superhot extract to his Milky Way bars. Kudos for attempting that.

Joe Park showed his multitasking skills by eating Milky Ways and completing a cardio circuit in the gym. I honestly think I woulda busted out laughing if I saw this occurring live.

Jamie McDonald was his vintage "Bear" persona and nuked a bunch of food with his Milky Ways. If only life were that simple for the panda....

Miki Sudo wolfed down five Milky Ways with large snakes on her shoulders. Now I don't think I woulda screamed like a girl with snakes all over me, but I'd probably make sure to use the restroom before the stunt began.

Paul Pickett and the rest of the Deadly Sins crew turned the Milky Ways into hot dogs, and Paul got hit with a kendo stick. Nope, I wouldn't want to get hit with that stick, thanks.

Big Eaters Club had quite an amusing video. Honey Badger trains dogs during her day job, and she incorporated that nicely with offering rewards. Max Carnage's reward: Milky Ways!

Juan Rodriguez went with ice cream bars and no hands. He and Kevin Ross win for best dressed, in my opinion.

Speaking of Kevin Ross, he downed two bottles of champagne and then inhaled the Milky Ways while just a tad drunk. Yup, won't be doing anything like that soon, either.

And finally, here's my video. I'm sure just about everyone who knows me figured I'd do a spicy twist on the Milky Way challenge. Never before had I done a stunt with three sauces each containing pepper extract, but I figured it was worth testing my spicy capabilities. Oh, and then I decided having a bunch of wasabi would also be neat if I could pull it off. I completed the stunt, but paid for it later. No wonder I'm deemed to be a stupid panda. Thank God for ice cream and antacids.

We're already planning another YouTube collaboration for Valentine's Day and hope to get many more people involved. Perhaps with the advance planning, we can get bigger YouTube channels to participate.
Posted by Aaron at 12:00 AM