Hash House a Go Go has locations in San Diego, California, and Las Vegas, Nevada. The West Sahara spot was on Man v. Food. For convenience, I went to the one on the Las Vegas strip, inside Imperial Palace. 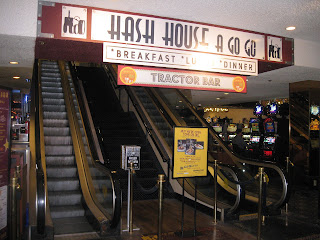 I finally got a chance to eat at the place that supposedly serves "twisted farm food." It had been on my radar ever since I first saw it on Man v. Food. Staying at Imperial made it all the more tempting to just go there for each meal. In a rare showing of mercy to my wallet, I didn't do that. 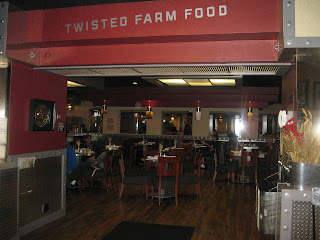 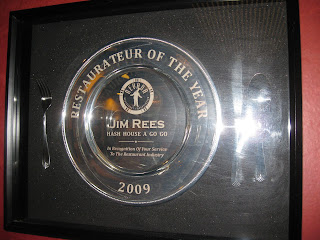 Before going inside the dining area, you'll see a number of autographed portraits and menus. Adam Richman's is one of them. 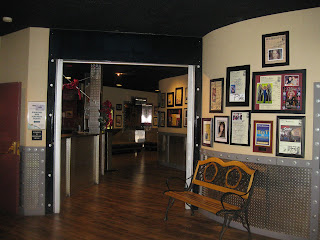 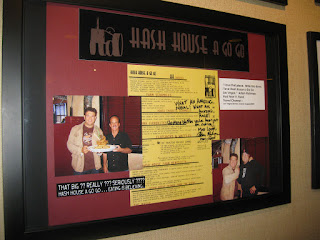 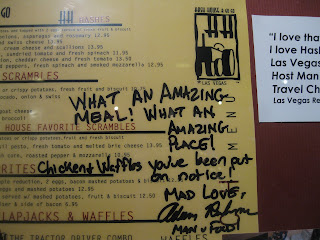 I decided to do takeout for dinner. While it was very tempting to just get the popular sage fried chicken and waffles, I was in a 1-pound stuffed burger mood. Oh, that'd be one pound of meat. The entire burger was probably closer to 2 lbs., although not quite there. 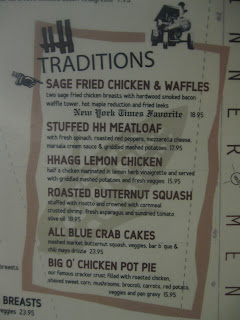 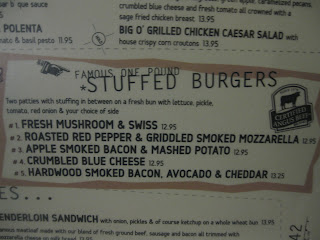 The mushroom and Swiss stuffed burger ($12.95) was amazing. Extremely juicy and gargantuan. Everything cooked perfectly. It was heaven just to see the melted Swiss and sauteed mushrooms. It's served with the cold fresh veggies on one bun half and the stuffed patty on the other half. Two big dill pickle slices in the burger. While the lettuce looked a bit wilted, that's probably only because everything stayed in the same closed takeout box for a few minutes. 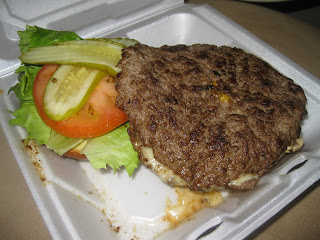 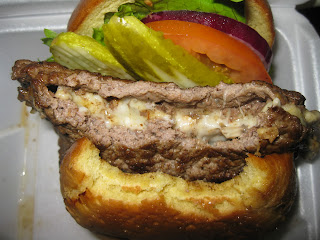 I'm guessing they used a brioche bun. Very soft and inviting. I personally think it could have been better with a slight toasting on the flattop. This just felt like the Juicy Lucy I had in Minnesota a couple years back, just in steroidal form. I think the burger could be too greasy and too imposing for some people. Fork and knife might be required. I for one needed a larger mouth.

Burgers come with one side item of your choice. I got the basil pesto tossed crispy potatoes and enjoyed every bite. Great job on the crispy potatoes. It also had some broken-down diced tomatoes in there. The olive oil from the pesto collected a bit at the bottom of the plastic takeout container.

Dessert is served all day here, and one of the servers mentioned that some items (like the bread pudding) are for in-house dining only. Might expect up to a 15-minute wait on that bread pudding.

Breakfast includes french toast, flapjacks, and the Fried Chicken Benedict, all of which was on Man v. Food. I hope to get back there for some of those dishes. 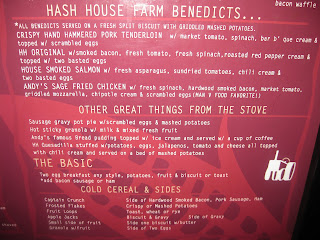 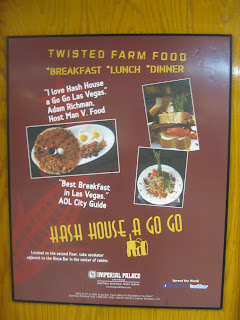 I saw the plating of the sage fried chicken and waffles I spoke of earlier, and it's literally a tower of food. Three or four waffles for the base, some fried chicken on top of that, and a large knife to hold it all in place.

Even with all the inflated prices on the Vegas strip, I think it's well worth the price to come here. Check this elite spot out the next time you're in the area. 9/10
Posted by Aaron at 12:00 AM