Allan's Authentic Mexican Restaurant is located in Portland, Oregon. This family business is also home to a spicy burrito challenge that I attempted in December 2012. 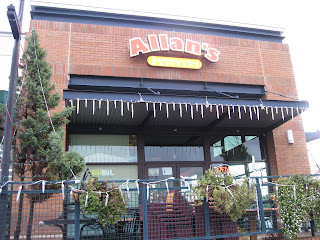 As I continue to subject myself to spicy torture, more people have jumped on the bandwagon to let me know how crazy I basically am. That's perfectly fine with me. I'm honestly having the time of my life enjoying my spicy addictions. Meeting new people and eating great food are great perks.

I stopped by Allan's a few days before Christmas and I had only been in the area one other time: when my friend tackled the Mad Greek Challenge at Mad Greek Deli across the street. 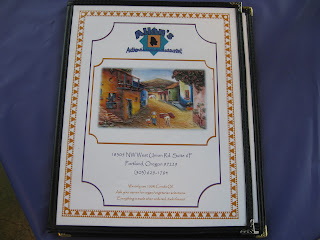 Of all the delicious options on the menu, I just had to go with the most painful for my first experience. Sadly enough, it's not the first time I've done that (see such posts like Killer Burger and Ribslayer To Go, among others).

The Diablo Burrito Challenge is not featured on the menu, but multiple photos of it are on the business Facebook page. It probably weighs around 1.5 lbs, but I'm poor at judging burrito size. There's rice, beans, steak, and 7-8 of the hottest peppers in the world. The family prefers that the actual pepper combination be kept a secret, but you can bet the farm that the burrito contained ghost peppers and habaneros. The burrito is also smothered in a mild red sauce that just happens to look very angry. The challenge is also quite pricey ($20), likely because of all the peppers that go into this one. 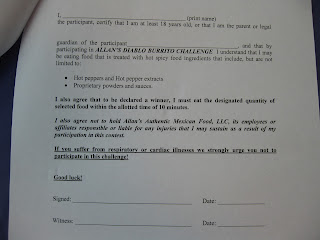 Challengers sign a waiver and then have 10 minutes to eat the entire burrito. You have to eat the two serrano pepper "horns" on top of the burrito first. If you succeed, you'll get your picture on their FB page and a free shirt -- and perhaps you'll get some other rewards (to be determined by the owner). Roughly 30 people had attempted the challenge before me, with no one finishing in the allotted time (three people managed to finish after time elapsed). It took me 8:20, but I was successful.

Here's the video of my burrito win, with voiceover commentary:


Before the pain hit about halfway through the challenge, I was enjoying my burrito experience. I suggest that anyone attempting the challenge should cut the burrito open to release all the steam, then just swallow large bites with water.

From what I gathered, dairy products are not allowed during the challenge. I drank a bunch of milk afterward to soothe the pain, but my stomach threatened yet again to mutiny. I don't blame it at all. 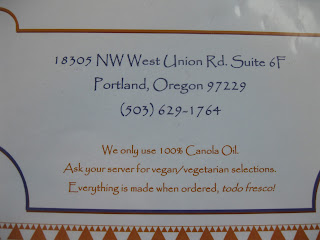 The family is real cool and I hope to head back there in the future. You can bet that I'll be getting a much more enjoyable meal on my return. 8/10
Posted by Aaron at 12:00 AM