Pink's Hot Dogs is a famous hot dog stand located in Los Angeles, California. But they also have a location on the Las Vegas strip, attached to the Planet Hollywood Resort & Casino. This blog post is strictly for the Vegas spot. 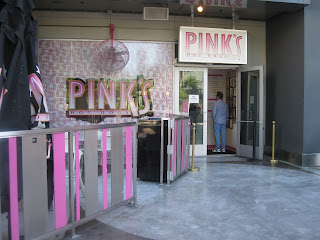 Pink's is entering its 73rd year in business, with famous movie stars and other public figures lining up for one of these hot dogs. Pink's basically started as a hot dog push cart with chili dogs at 10 cents. Paul and Betty Pink then went brick-and-mortar by 1946. 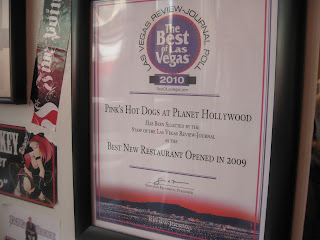 Admittedly, when comparing prices with the original Los Angeles venue, the Vegas spot is much more expensive. Predictable. 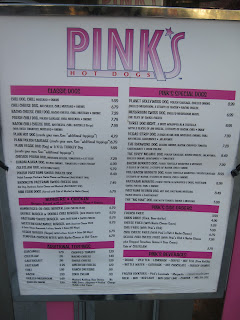 Not really seeing a deathly spicy option (not saying that I was gonna find one), I got whatever could be interpreted as spicy to some people. The Spicy Mojave Dog ($8.49) was my choice. Yeah, you read that right. It was gonna basically be $9 with tax for a damn hot dog. Polish sausage, nacho cheese, pickled jalapenos, grilled onions, guacamole, and tomatoes. 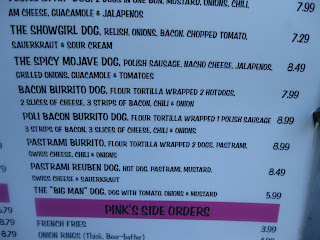 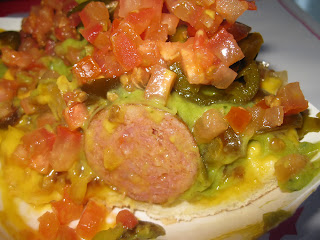 It looked and tasted like your basic hot dog bun here. With the larger Polish sausage and an abundance of toppings, it really needed one of those gourmet buns to even give me a shot to pick it up. Fork and knife would have to do.

Flavor-wise, it did the job. It's basically as good as I could have expected this to be. Great snap from the Polish dog. Nacho cheese felt like it came from a container. The veggies and the guacamole tasted fresh. My issue is simply the price. There's no way this poor panda would even want to pay around $9 for a hot dog, even if edible gold was attached to this sucker. Besides, I'd take the edible gold and try to extract monetary value from it anyway. 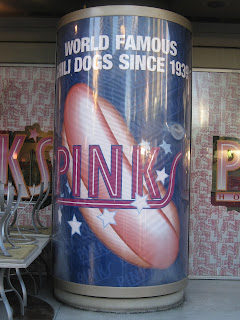 I look at the Yelp reviews for the Los Angeles Pink's, and it's around a three-star average. Vegas is getting around the same mark. I'd bet people complain about the price directly ("it's too expensive") or indirectly to some degree ("it's not what I expected all this hype to be"). The line's also longer in L.A., so that probably also affects the reviewer's rating. 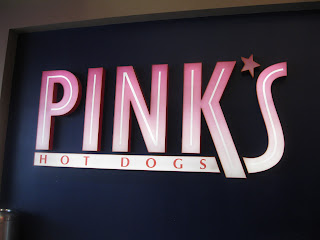 Pink's was good for the experience. I can't complain much about the food other than not being able to pick it up. But I basically don't want my wallet to have a reason to riot again. 5.5/10
Posted by Aaron at 12:00 AM